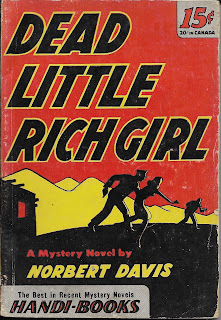 Dead Little Rich Girl (aka The Mouse in the Mountain; 1943)

The first of the Doan and Carstairs mysteries--Doan is a private investigator and Carstairs is his partner. Carstairs is also a very larger Great Dane. Doan has been sent to Mexico to track down a corrupt ex-policeman by the name of Eldridge. Eldridge is threatening to return to America and rat out the equally corrupt officials who have been getting along quite nicely in his absence. Our private investigator says he's been hired to make sure Eldridge stays put. So he and Carstairs plan to hop on a tourist bus headed to Los Altos.

Luckily for him, a wealthy young woman by the name of Patricia Van Osdel also wanted to go to Los Altos. For you see, the bus is the only way for tourists to get there and the bus service was going to be cancelled--but American dollars in large quantities can change plans. The only question is, why was Patricia so set on visiting the out-of-the-way village in the mountains? Along for the ride is Patricia's maid and her "companion" Greg, the Henshaw family--harassed father, loud and overly coting mother, and bratty son, and Janet Martin, a teacher playing hooky on her first real vacation adventure.

The group runs straight into murder and mayhem. There are dangerous banditos running about the town. There are hidden caches of weapons. There is an earthquake that shakes more than the ground. There are rattlesnakes. And Patricia Van Osdel manages to get herself murdered. Doan must try to complete his mission, avoid being put in jail by secret policeman who doesn't trust him, keep Janet from getting into difficulties, and solve several murders before he and Carstairs may return safely to the United States.

This is a wacky, sortof hard-boiled crime novel. Though Doan seems a little too short and round to be a hard-boiled private eye. A screwball private eye tale with lots of action and plenty of fast-talking on the part of Doan.  Norbert Davis paired up his private eye with an animal long before it was cool and pulls it off without making Carstairs too cutesy (as if a Great Dane the size of a Shetland pony could be cutesy).  The interactions between the two are funny and realistic....I can just see Carstairs harrumphing over some of Doan's shenanigans.  The dialogue is funny and witty and it's worth the price of admission just to take the bus tour with Bartolome the tour guide. Bartolome will tell you exactly when something is magnificent--"please admire this bit now" and "do not waste the astonishment" on those trivial fantastic scenes over there. And Davis takes you from one loony character to another and it all fits so nice and snugly in this lovely vintage mystery.  ★★★★

First line: When Doan and Carstairs came down the wide stairway and walked across the pink-tiled floor that was the pride and joy of the Hotel Azteca, the guests in the lobby stopped doing whatever they were doing to pass the time away and stared open-mouthed.

Deaths =  8 (three shot; one hung; one killed by falling debris; one hit with stone; two stabbed)