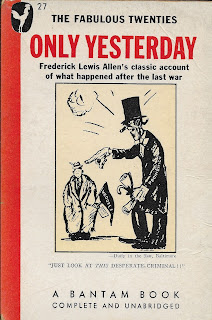 Only Yesterday (1931) by Frederick Lewis Allen

Frederick Allen was the editor of Harper's Magazine and a writer of recent (to him) and popular history. Here he provides an interesting look at the Roaring Twenties and adds personal, man-on-the-spot insight on most of the events that should have shown up in our school history books.

Allen's book covers everything from Prohibition to Lindbergh's flight, from flappers and rum running to the Scopes trial, from the Teapot Dome scandal to prosperity under Coolidge, and from booming business to the stock market crash in 1929. He reports history from the vantage point of a mere ten years (at most), giving readers of today a contemporary view of the times. It is rather disturbing in a way to realize how much our own present reflects the history of 100 years ago. We still endure presidents who place cronies in positions--who rather than "draining the swamp," just added to the swampiness. We still have unions struggling to be relevant in the face of the rich owners who don't want to share prosperity with the little guy. We see the rise of book-burning and fear that schools are indoctrinating the children in some nasty ideology--whether that be the Red Scare of the past or the dreaded "CRT" of today. The more things change, the more they stay the same.

An interesting history lesson from someone who lived through the First World War and the years that followed. ★★★★

First line: If time were suddenly to turn back to the earliest days of the Post-war Decade, and you were to look about you, what would seem strange to you?

In Mrs. Smith's mind, as in that of the manager of the Palm Garden, short-haired women, like long-haired men, are associated with radicalism, if not with free love. (p. 17)

Last line: The stream of time often doubles on its course, but always it makes for itself a new channel.