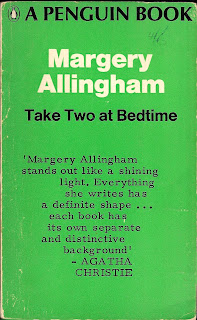 "Wanted: Someone Innocent": Gillian Brayton is struggling to make ends meet. Raised to be a lady, schooled in the art of figuring up a dress budget and making conversation but not how to make a living, she's working at millinery shop when she decides to attend a reunion at her old school. Imagine her surprise when Rita Raven--now Fayre latches onto her. She and Rita were never the bosom pals that the woman is now claiming. But Rita makes a point of saying so to anyone who comes near while they're together. And at the end of the day, Gillian finds that she's agreed to come home with Rita to be a companion at 300 pounds a year. But Gillian hasn't been there long before she feels that she's made a big mistake. The servants seem to think she's there for some devious purpose and there's a strong sense of foreboding. She makes up her mind to leave, but too late. Rita Fayre is found dead and everyone thinks Gillian killed her....

"Last Act": A nasty, manipulative French actress dies under mysterious circumstances. Our heroine and her boyfriend, the actress's heir, become the prime suspects though there are many options (given actress's nasty nature). The actress left clues behind to point to her killer...but do they mean what we think they do?

It's been a while since I've read any Allingham, but these short stories (which do not feature Albert Campion) come across as damsel in danger stories more than mysteries. If the menaces Gillian and Margot faced had seemed (more forcefully) to have come from their love interests, the stories would have had an even more gothic romance/thriller vibe. In all honesty, neither of these represent Allingham at her best, but of the the two "Wanted: Someone Innocent" is the stronger story. It has a much better twisty plot and the denouement is very good. There is a common theme here that ties the two stories together (which I can't mention because--spoiler!) that is used much more effectively in the first. ★★★

Last line (last story): If it's any comport to you, there are no stipulations.