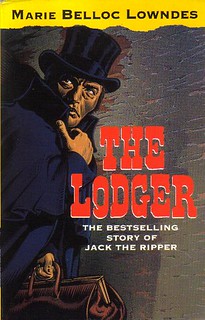 The Lodger (1913) by Marie Belloc Lowndes

The Lodger is the first known novelization based on the murder attributed to Jack the Ripper. Last fall I read a volume which contained two shorter fictional pieces (The Hypno-Ripper edited by Donald K. Hartman), but this is the first novel-length story. Here the terrifying murderer signs himself "The Avenger" and seems to have a fixation on drunken women. His murders take place when the streets are fairly empty and come in pairs--either one murder on two nights close together or two murders in a single night. But the story doesn't focus on the murders themselves, rather it focuses on Mr. and Mrs. Bunting, former servants--butler and maid--who have fallen on hard times and have decided to take in lodgers to bolster their dwindling finances. But they've had little luck and have just about given up hope when Mr. Sleuth arrives at the door.

He's looking for somewhere very quiet and is pleased that he will be the only lodger. In fact, he pays well over the asking price so the Buntings will not take in any other lodgers. And Ellen and her husband believe their luck has turned at last. But then...they each begin to suspect that there may be more to their reclusive, rather odd tenant than first appeared. Could it be possible that they are harboring the villainous creature who preys upon women at night?

The story is full of psychological suspense. We watch the effect Mr. Sleuth's presence and the onslaught of news about the murders have on the Bunting's--particularly on Ellen. Ellen is the one who has the most contact with Sleuth--serving his meals and cleaning his rooms. It isn't until Mr. Bunting encounters Sleuth when returning home late one night that he begins to have doubts about the man. But the first time Mr. Sleuth is out late, Ellen is wakeful and hears him moving about. From that moment on her fears and suspicions grow. She tells herself that if he is the killer, then he isn't responsible. Obviously, he's a bit odd--what other man sits up reading the Bible at all hours, reciting all the cruel bits about women? How many people talk to themselves in that bizarre manner? His oddness serves as a shield--and an excuse for her to accept his money for the lodging. She believes he must be The Avenger, but she doesn't want to have to accept it.

This is an excellent example of early psychological suspense--it mounts steadily until the final scenes and provides a satisfying ending. ★★★ and 1/2.

Last line: Mr. Bunting and his Ellen are now in the service of an old lady, by whom they are feared as well as respected, and whom they make very comfortable.

This sounds really interesting, particularly since it was published in 1913.