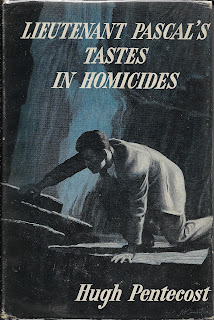 This collection features three short stories/novellas with cases handled by Lieutenant Dave Pascal. Overall, a strong selection of stories--though "Eager Victim" is not quite up to the caliber of the other two. Had it been of equal strength, the collection would have rated a full four stars. As it is--★★★ and 1/2.

"The Murder Machine": Lt. Pascal is spending his vacation at his Uncle Ben's home. Uncle Ben is the local sheriff and, in this re-election year, isn't shy about taking advantage of his big-city police connection. He asks Pascal to give a lecture at one of the local societies about crime and such. When Pascal obliges and ends his talk with comments on how he wished they all were better at crime prevention, a few of the locals ask him if he'd like to take a shot at doing just that. There has been a series of vandalism at the local stone quarry and Marshall Hewitt, the new owner, is preparing to do the spring blasting. Most folks in town believe that Tom Anderson, former owner of the quarry--as well as jilted fiancé of Hewitt's wife, is behind the vandalism. Now they are afraid that something deadly might happen at the blasting. When the blast goes off prematurely and Hewitt is killed, it looks like they were right. But Pascal believes that Anderson's been framed and he and Uncle Ben start investigating. When another death occurs things get personal and Pascal is even more determined to bring the guilty party to justice.

"Eager Victim": Lt. Pascal investigates the death (by ice pick) of a newspaper "editor" whose sole job seemed to be to drink martinis and wait around for someone to kill him. Probably the lightest-weight of the three stories. There's little observable investigation in the beginning--Pascal does a great deal off-stage--and a pretty heavy dose of office romance as our narrator (the man who discovered the body) tries to make up his mind between his high school romance/fiancée, who is nice and sweet and comfortable, and the lady who minds the newspaper's morgue, who gives him such a jolt of excitement. Things do get more interesting after the second death--but I have to say I wasn't enamored of the narrator's viewpoint on the story. Maybe if he hadn't been so distracted by girl-trouble...Also, the culprit seemed a bit obvious to me.

"Murder in the Dark": This one takes its name from the unusual diamond-buying procedure described in the story. Buying "in the dark" involves a diamond broker obtaining an allotment of rough diamonds with a set amount of carats and agreed upon types [there are various types of rough diamonds] but without seeing the actual stones. The sealed packet is then sold to a customer who is gambling on whether the stones will cut properly and be worth what she or he paid for them...or, hopefully, worth even more. A recently wealthy man comes to New York City to buy diamonds and, being a gambler by nature, decides to buy them in the dark--but before the night is over the man is dead and the diamonds have disappeared. The story turns into a Maltese Falconish tale--with people crawling out of the woodwork looking to find those diamonds. It's up to Lieutenant Pascal to figure out who thought the stones worth killing for and where those gems might be. Fairly good story albeit with one of the main suspects running in and out of the police investigation in a rather improbable way.

Last line (last story): Kelly glanced at Carla, and he saw in her eyes that that was the way she felt about it, too.

Deaths = 7 (two blown up; one stabbed with ice pick; two fell from height; one hit on head; one shot)