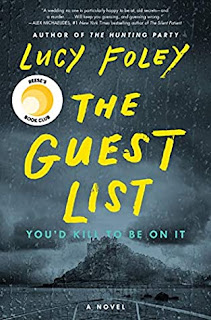 Cormorant Island off the coast of Ireland is set to be the scene of the wedding of the year. Will Slater, the handsome, golden star of the reality show Survive the Night, and Jules Keegan, owner of the online fashion magazine The Download, are getting married in a huge extravaganza on the secluded island. With only the best of everything--an exclusive setting at The Folly, which looks like an Irish castle; a made-to-order wedding gown and gold crown for the bride; a spectacular wedding cake; expensive drinks and wedding breakfast....and enough secrets to make the tabloids go wild. But one of the secrets is worth killing for and it winds up many of the guests have a reason to kill. But who will the victim be? And, in the end, who will wield the weapon? As a terrific storm bears down on the island, the tensions among the wedding party and special guests build towards a splendid, twisty climax.

This was a wild ride--just over 300 pages and I read it all in one day, and nearly all in one sitting. It's always interesting to read a thriller where the group is cut off from civilization or whatnot by weather; when you just know something's going to happen because help is going to be so long coming. Foley provides lots of motive and plenty of twists and turns to keep the plot moving in this real page-turner. I did figure out the primary motive, though I wasn't sure to whom it belonged. The one real drawback is how few of the characters are really likeable and it was difficult to find anyone worth rooting for. But overall a good, well-plotted story. ★★★★

First line: The light go out.

See, mine is a profession in which you orchestrate happiness. It is why I became a wedding planner. Life is messy....Terrible things happen....Bu no matter what happens, life is only a series of days. You can't control more than a single day. But you can control one of them.

Last line: I am only sorry I didn't get the chance to plunge the knife in myself.

Deaths = 4 (one overdose; one drowned; one stabbed; one heart attack)