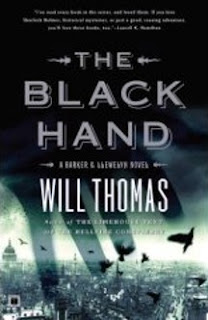 Private enquiry agent Cyrus Barker and his assistant Thomas Llewelyn begin their fifth recorded case at the docks of London's East End. The bodies of an Italian assassin and his wife, who was just as deadly as her husband and never far from his side, are discovered floating in a barrel near the docks. Then Sir Alan Bledsoe, Director of the East and West India Docks, is found assassinated in a very Italian way. Soon Scotland Yard and the Home Office are asking Barker to take up the case, knowing his ability with out of the ordinary cases. More corpses appear around London--as well as notices from The Black Hand, the Sicilian mafia. No one wants the mafia to move into the British criminal classes and Barker must find a way to bring antagonistic parties--the tough dock workers, French Apaches, and the Italian (non-Sicilian, anti-mafia) Camorra together to fend off a common enemy. The job becomes very personal indeed when Barker's chef is attacked and even the home of his lady friend (Llewelyn isn't quite sure of her status in his boss's life) is invaded. Barker's ultimate goal is to bring the mafia mastermind behind all the killings out into the open. He has an idea who the man is, but unless he can flush him out it will be difficult to bring him to justice.

Thomas continues to expand on this new look at the Holmes and Watson/Wolfe and Goodwin detective team.  Lots more action than most of the Holmes stories and Barker is far more mobile and physically involved than Nero Wolfe generally is.  And I continue to enjoy the characters.  They are very  interesting and I particularly like the interaction between Barker and Llewelyn.  They have the chemistry necessary to create a duo to follow in such auspicious footsteps.  In the first book, we learned a lot about Llewelyn's background with more revealed in each installment, but we get just bits and pieces about Barker. Barker is a very private man and it's a good indication of their developing relationship that he finally introduces his assistant to the Widow (his mysterious lady friend). There is still plenty more to be revealed about Barker and I look forward to learning more in the next book.  The other members of Barker's staff from Mac the butler and general factotum to Etienne Dummolard, his French chef, are also well-drawn. We see quite a bit of Etienne this time, though the circumstances are unfortunate for the chef. He's stabbed twice and barely survives the attack, but recovers with full force (and plenty of vim and vinegar).

The book ends with a lovely scrap on the docks--Barker and company taking on the Sicilians. And Llewelyn gets to display his newly learned knife skills. Quite an action-packed final scene. Entertaining and very informative on the early years of the mafia.  ★★★ and a half.

First line: I stepped across the sill of the conservatory, glass crunching under the heels of my boots, and steadied my Webley pistol with both hands, reluctant to step inside.

Last line: And so it began again.