An Hour Before Daylight 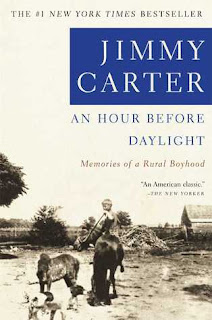 An Hour Before Daylight (2000) by Jimmy Carter

Jimmy Carter brings us his Depression-era boyhood on a Georgia farm before the civil rights movement was imagined. He writes vividly, powerfully, and honestly about his family and the area he grew up in--providing a portrait of the rhythms of farming in a sharecropping economy and giving us an intimate look at his father, who was a brilliant farmer. Earl Carter was a strict segregationist, but treated black workers with respect and fairness--allowing his son to play with the children of his black farm workers and to learn farming and life-long skills from the parents. His mother was strong-willed, well-read, and a registered nurse who flouted segregation in many small ways. He also tells us of the five other people who shaped his young life--three of whom were black

Told as if he were reminiscing--one topic leads to another and then circles back again. It is a rich, evocative story of a time when family was first and closest. A time when everyone worked hard, played hard, and spent evenings sitting on the front porch. A time when everyone knew their neighbors--and their vehicles, mules, and dogs--and knew when someone or something was around who didn't belong. Carter gives us an excellent recollection of what life during the Depression was like for farmers in the South and tells how the times shaped him as well as the nation. ★★★★

First line: If you leave Savannah on the coast and travel on the only U.S. highway that goes almost straight westward across the state of Georgia, you will cross the Ogeechee, Oconee, and Ocmulgee rivers, all of which flow to the south and east and empty into the Atlantic Ocean.

Last line: After all, the land belonged to the Indians before it was ours.