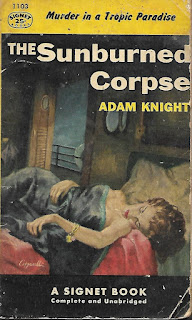 The Sunburned Corpse (1952) by Adam Knight

New York private eye Steve Conacher thinks he off on a simple little skip trace case--with the bonus of a free cruise to Puerto Rico and a bevy of beautiful babes to fraternize with along the way. Nancy Scott's father has hired him to track down his daughter and convince her to come back home to New York. Conacher's first contact is a pleasant one--at least temporarily--a lovely young woman who knows Nancy and just may know where she's at...as well as having a definite yen for anything in trousers. But Conacher gets one night with her and only manages to learn part of what she knows before Nancy is strangled and her body dumped overboard. Steve's the only who believes she's been murdered and the captain "sadly" notes her down as a suicide. So, while looking for Nancy, Steve is also on the track of a murderer. And the trail leads him to one San Juan's night spots as well as to a picture gallery. He winds up mixed up with artists and gallery owners, drug smugglers and killers. But his nosy little questions and tendency to follow the cast of characters about soon leads him into trouble. And maybe this time he's in too deep to get out.

I hate to spoil things....but there isn't...a sunburned corpse, that is. Corpses we got--plenty of 'em. One's a little bit tanned. But no sunburns to be had. Hope you weren't counting on it.

I do wish that sellers on Ebay would stop grouping this kind of thing in with a lot of Golden Age Detective novels. For several Christmases and birthdays now my husband has picked up an Ebay offering with several books in it (books on my To Be Found list) and the seller--desperate to get rid of them, I guess- will shove in a Steve Conacher private eye or something totally off-the-wall like The Ugly American. And I keep hoping the Conacher books will get better--because I can't resist reading books that come into my house. After three, I can tell you--they don't. In fact, this fourth entry drops back to the level of the first book in the series. It doesn't have a very interesting plot and unlike I'll Kill You Next! (book 5) the motive isn't particularly exciting either. We've got drugs and diamonds...and high class gangsters and their gunsels as well as low-class swindlers trying to muscle in on the racket. Conacher gets knocked out a few times--which seems to be one of the things he's good at; it happens in every book. I'd think the man would be permanently brain damaged. It's all too dreary for words. ★

First line: The girl with the straw-colored hair was beautiful.

Last line: I ran to the telephone and called them.