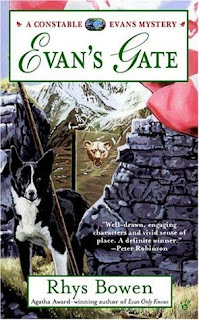 Big changes are in store for Constable Evan Evans. He has recently been accepted into the plainclothes division of the force and he's making preparations to marry Bronwen and make a home in shepherd's cottage that needs renovation. But he's just started working on getting the building clearances when Evans is called in to help with a missing child case. A five-year-old little girl has disappeared from the seaside caravan park where her mother had brought her for health reasons. The prime suspect is the little girl's estranged father, but an extensive campaign fails to find him...and exhaustive searches in the area fail to find any trace of the girl.

Evans snatches time when he can to make progress on his cottage. One of the tasks is to did a new water line. And when he digs he finds the skeleton of another child. It appears to be about 20-25 years old and Evans remembers another little girl who went missing on the mountain. A little girl by the name of Sarah who looked a lot like the current missing child--small, fragile, blonde, and very pretty. When he finds out Sarah's family is back in the area--celebrating the birthday of an aged grandfather, he wonders if the two incidents are connected. He's had hunches in the past that panned out and he hopes that if he can find some clues from the past that it just might help solve the current case as well.

I first started reading the Evan Evans mysteries back in the late 90s/early 2000s when they were published. I found them charming, enjoyed the Welsh characters, and the descriptions of the Welsh countryside. And then other books caught my attention (as so often happens) and I wandered off and didn't read this one (that I had picked up at the library's used bookstore) or any later installments. Returning to the series, I still enjoy the Welsh setting and find the characters interesting--though there are fewer appearances of the locals than I remember in earlier stories. The mystery is decent, though the solution to the two cases is a bit dissatisfying--I had hoped they would tie up differently and I thought the explanation of Sarah's death and place of burial to be anti-climactic. I realize that this is a more cozy police procedural, but the answer really was a bit of a let-down. ★★★ for setting, characters, and interesting set-up. Would have been higher had the ending been stronger.

First line: The small girl moved over the springy turf of the mountainside, her light feet making so little impression on the grass beneath her that she appeared to be weightless, a bright spirit only barely connected to solid earth.

Last line: "I was right all along," he said in a low voice. "She was taken by the fairies."

Deaths = 2 (one drowned; one fell from height)