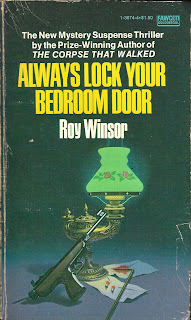 Addie Hill, an elderly neighbor of professor-detective Ira Cobb, calls on the erudite sleuth and his guest Steve Barnes (also a professor) to witness her new will. It seems that a house guest of her husband's, a certain Robey Pearson, has been blackmailing Ellis Hill and when he wouldn't pay up began to demand money from Addie. She also refused to pay blackmail money and Pearson turned around and threatened her life--knowing full well that Ellis would inherit the bulk of her rather hefty estate. Addie has already had difficulties with other greedy relatives and has decided that making a new will that cuts out both her husband and the rest of the money-grubbing clan will protect her from any unfortunate accidents.

She would be wrong. The will gets signed, Cobb and Barnes head back to Cobb's place--taking the will with them for safety. The plan is to mail it to Addie's lawyer. Cobb hands an envelope addressed to the lawyer to Barnes, who promptly sets out to mail it. He's later found knocked out cold and the envelope missing. Cobb is certain that Addie's life is in danger and they rush back to her house to check on her. They're too late. Someone has already hit her over the head as well...doing a more thorough job and killing her. Pearson is also lying dead in her room, but evidence shows that he didn't kill her.  It only makes sense that whoever hit Barnes over the head and stole the envelope also killed Addie to prevent her from replacing the will. But everyone with a motive also has an alibi for at least one (if not both) of the attacks. It's up to Cobb to figure out who really had time to do the deeds...and also why Pearson was killed as well.

This turned out better than I thought it would. I picked this up at one of our Red Cross Book Fairs back in 2014. Never heard of Roy Winsor before, but, by golly, he had a professor acting as sleuth and you know how those academically-inclined mysteries grab me. And then--I kept picking it up and thinking I might read it, but the opening paragraphs just never did much. And then--this year I fixed myself up with a Reading Randomizer reading challenge that was meant to get books off the ol' TBR pile whether you wanted to or not. And the randomize prompt brought this one up for April. So now, if I wanted to complete the challenge, I HAD to read the Winsor book

I'm glad I did. Once I got past those first few pages (that still didn't excite my reading heart), it got interesting. I really like Addie and was sad to see her killed. But I knew it was coming as soon as I heard about those greedy relatives and she decided to cut them out of her will. I also enjoyed the two professors working together and the fact that Cobb likes to drop quotations here and there. Though I must point out--he doesn't do it quite so effortlessly and adroitly as Lord Peter Wimsey. The ending is a little clumsy (which is why I didn't give a full four-star rating) and anti-climatic. Even though I didn't get why Cobb immediately knew who hit Steve Barnes over the head as soon as they found the weapon, the complete solution was telegraphed a little too plainly two-three chapters from the end. So when the "big reveal" came in a gather all the suspects moment in the final chapter...well, it really wasn't all that big.

But overall I enjoyed my introduction to Ira Cobb and I'm looking forward to reading the other title I picked up at that same book fair. ★★★ and 1/2.

First line: Below the high bluff at Siasconset on the northeastern coast of Nantucket and as far out as I could see, the ocean lay motionless, iron-gray under the dark overcast of the mid-August evening.

Last line: And that's just what we did do, closing both the house and our minds to the aftermath, the sweeping up of ashes of the two murders on that Thursday night and of those who had committed the crimes.