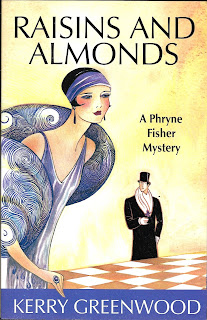 When a young Jewish scholar is poisoned in her bookshop, Miss Sylvia Lee is immediately arrested for the murder. The young man owed her money and Detective Jack Robinson suspects there is something of the love gone wrong about the situation as well. But Benjamin Abrahams, an influential Jewish business man and Miss Lee's landlord, doesn't believe it, and he hires Phryne Fisher to get to the bottom of things. She soon learns that a group of young Zionists, including Abrahams's gorgeous son Simon, have been using the bookstore as drop site for secret messages...and it looks like someone left a booby-trapped book for the scholar (also named Simon). Now, all Phryne needs to find out is who and why.

The Zionists come under suspicion, but Phryne's sure that there's something more going on than the need to furnish the militants with funds. Nearly everyone in Phryne's sphere gets an assignment to help unravel the mystery. Dot interviews the shopkeepers surrounding the bookshop, Bert and Cec get temporary jobs in the area so they can scout for clues, even Phryne's adopted daughters keep their ears to the ground when invited to tea at a home in the Jewish community. And, of course, Mr. and Mrs. Butler keep everyone fed and supplied with cocktails.

I enjoyed returning to what I like to call the grown-up's Nancy Drew. Just like Nancy, Phryne can do it all--from drive splendid cars to fly air planes to take down bad guys--and has it all--from wealth to looks to an enviable wardrobe. And, of course, she loves a good mystery. I enjoyed learning new things about the Jewish community and watching Phryne navigate the unknown territory. And I always like the way she's willing to research any new topics that come along. The story finds her sitting up late reading up on Zionism and Jewish mysticism. The culprit isn't too hard to spot (we're not teeming with suspects), but it's still good fun to go along for the ride on another fast-paced adventure with Phryne. ★★★ and 1/2.

Last line: "So I just took them in the next room and asked them to sing me Raisins and Almonds," said Phryne.

Deaths = 2 (one poisoned; one stabbed)