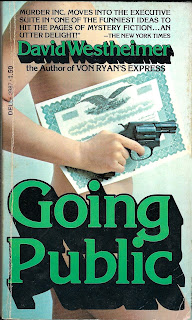 Three bright young men discover, pretty much by accident, that they have a real gift for removing people who are found to be encumbrances in someone's everyday life. They're so good that the deaths are never suspected to be anything more than natural at best or accidental at worst. When all three (individually) are hired by three separate people to remove the same man, they decide to join forces. They call themselves the Three Willies (an inside joke). And eventually, they see the need to incorporate in order to save money on taxes. That's when they learn to call what they do "undertakings" and their subjects "units." They go all in and set up the Three Ws Corporation, complete with publicly traded stock, advertising, and even hostile takeover attempts. Yes, a certain stockholder decides that he wants a controlling interest in the Three Ws and that when the partners determine to make one final killing--in the best sense of the word.

Who knew that murder for hire and the finer details of business and incorporating same could be so funny? And who knew I'd enjoy learning all the ins and outs of how to run a business--including when is a good time to diversify; how to maximize profits; how to sell a service that's difficult to describe (legally, that is); how to go about finding new trainees; etc. I'm not entirely sure that it's fair to call this a mystery--after all, we know exactly who did what to whom and how. But there is a mystery towards the end--how can they get rid of the bothersome individual who wants to take over their company without violating their own personal rule: To never use their skills for personal gain (other than monetarily in the line of business, of course). Their favorite business lawyer has an ingenious solution and, thus, lives up to his status as an honorary Willie.

This is just enormous fun. It skewers the business industry so expertly, that you would think one of the Willies had performed the "undertaking." All the worst qualities of the business world are put to use to further the ends of the undertakings--and it is usually men who display those worst qualities who become "units" in the company's production line. It also shines a light on the religious faction who don't seem to mind being hand-in-glove with dirty business practices as long as they can claim profits "for the glory of the Lord." A terrific commentary on big business with comments that are just as applicable to the business practices of today (unfortunately) and all done with murder mayhem and good humor. ★★★★

First line: The three young me sat patiently in the intimidating opulence of the ante-room of Rhomber, Kissel, and Wurlitz, Attorneys at Law.

Last lines: They all remained fast friends until they died. And when they did, at ripe old ages, all were interred by one or another branch mortuary of Sweet & Low, "Serving the Silent Majority."

Deaths = 7 (one fell from height; one shot; one hit by bus; two natural; one blown up; one drowned)