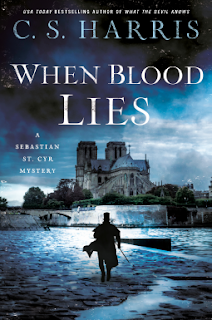 Warning! If you have not read the previous books in the series, then there will be spoilers to the long, arcing storyline in our protagonist's life.

In March of 1815, Sebastian St. Cyr, Viscount Devlin, has traveled to France, along with his wife Hero and family. The Bourbons have been restored to power, the French people are growing restless, and there are rumors of the return of Napoleon. But Devlin ha a single purpose, he has firm hopes of finally meeting up with his long-lost mother and learning the truth of his parentage. It's been a long wait--from the moment he learned that the Countess of Hendon did not perished at sea to learning that the Earl was not his father in anything but name to learning that his mother was in France to waiting for France to be calm enough to make this journey possible. There may still be unrest in the Gallic nation, but he refuses to wait any longer. He learns that she has been traveling in Vienna, but is set to return to Paris.

But more tragedy awaits our hero as his mother is fatally stabbed on the bridge leading to the house he has leased in Paris. He arrives in time to be recognized with a ragged, whispered, "Sebastian," but Sophia Hendon dies without regaining consciousness or naming her murderer...or naming Devlin's real father. In these turbulent times, the French authorities have no interest in finding the killer of an Englishwoman who was the mistress of one of Bonaparte's former generals--even if Maréchal McClellan has now sworn allegiance to the Bourbons. And the Bourbons, as represented by Marie-Therese, Duchesse d’Angoulême, warns Devlin off his quest for justice, as does his antagonistic father-in-law, Lord Jarvis. But official warnings have never stopped him before.

The investigation reveals disturbing information about his mother. It seems that before she returned to France she made a detour to Elba. And evidence indicates that at the time of her death she had been in possession of a talisman sacred to those who would rule France. It has since disappeared. Did she deliver it to Napoleon on Elba and is that why he's emboldened to return to Paris? Or was she taking it to someone else before meeting with her son? Does this mean that her death is political? Other deaths follow and the clues begin to point in various directions--including a very personal one. Threats are made against his family and he races to find answers before he loses anyone else dear to him.

I spent 2020-21 rereading the earliest entries in this series and then getting completely caught up with Devlin and his lady. I finished the previous book in July of last year and have been waiting very impatiently--first for this one to be published and second for my turn on the library holds waitlist. I got my hands on it on Friday evening and finished it by Saturday afternoon. I absolutely love this series. It is one of my all-time favorite historical mystery series. It is also one of the deadliest I read (regularly racking up deaths in the double-digits), but the pacing is perfect, the characters so appealing, the historical details so absorbing (without being overwhelming), and mysteries so interesting that the death count wouldn't seem so high if I weren't tracking for the Medical Examiner's Reading Challenge. I have enjoyed watching Devlin's journey, even as I am saddened by each new tragedy Harris sends his way. The next book isn't due out till next April...it's going to be a very long year. ★★★★★