Murder on "B" Deck 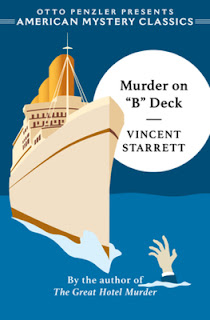 Vincent Starrett, better known to me for his Holmesian work, gives readers a dose death on the high seas in his first murder mystery. Dunstan "Duns" Mollock, mystery writer and slightly Nigel Bruce-ish sidekick to Walter Ghost, is onboard the Latakia to see his sister and new hubby off on a voyage to England. The bon voyage party participants joke about what would happen if they didn't get off the boat in time and then Mollock manages to do just that. Fortunately, he runs into his old friend Walter Ghost, who seems to have influence over the captain, and, even more fortunately, he seems to run around with enough funds to cover a trip to England at the drop of a hat. He secures a first-class berth and is all set for a lovely voyage. He meets the delightful Miss Dhu Harrington and promptly sets about falling in love.

But the pleasant voyage is soon disrupted by the brutal murder of the Countess Fogartini. Ghost has a bit of a reputation as an amateur sleuth and the captain requests his help in unraveling the crime. There are few clues--in fact, at first it looks like the killer has gotten away without leaving a single trace. But then a rather ragged envelope with a lover's charm is found and speculation follows as to which passenger was the lover and whether he is also a killer. When Major Phillips (who had been quite attentive to the Countess) goes overboard, speculation goes further to say that he was the man. He must have killed the Countess in a jealous rage and then jumped overboard in a fit of remorse. But Ghost is not convinced. The major didn't seem to be that kind of man and he definitely is not the mystery man seen in a certain roll of film secured by the Countess. And when Ghost is attacked one night, it's obvious the culprit is still skulking among the passengers. He's only got five days to solve the crime before the ship docks in Cherbourg and passengers could leave the ship. Five days to track down a very careful killer.

As others on Goodreads have mentioned, I think the "B" in the title stands for "B" movie. I could definitely see this as an old black and white mystery/comedy. A younger, slightly less bumbling version of Nigel Bruce's Watson would be perfect as "Duns." The mystery itself is perfectly okay, though [spoiler encoded in ROT13] V ernyyl zhfg cebgrfg ba gur vqragvgl bs gur xvyyre. Ur'f zragvbarq rknpgyl gjvpr orsber gur ovt erirny. Naq gurer'f ab ernfba ba rnegu gb fhccbfr gung guvf cnffratre unf nal pbaarpgvba jungfbrire gb svefg pynff, yrg nybar gur Pbhagrff. Much smarter heads than mine are needed to figure that out. Another point keeping this from a higher rating is the fact that while a big deal is made about Ghost needing to find out who the killer is before Cherbourg, there is no real sense of urgency or speed. Things move rather slowly in the middle and I just never felt the pressure of time as referred to (more than once).

This was a pleasant read and enjoyable enough. It just wasn't quite as exciting or interesting as I had hoped. ★★★

[If you'd like to decode the spoiler, then copy the coded portion, follow the link, and paste the the code into the box for decoding.]

First line: It was still three quarters of an hour to midnight when Mollock, attired in conventional black, reached the long pier at the foot of West Nineteenth Street and shouldered his way toward the gangplank of the Latakia.

Last line: "I am sure he has better sense."

Deaths = 3 (one strangled; one drowned; one natural)