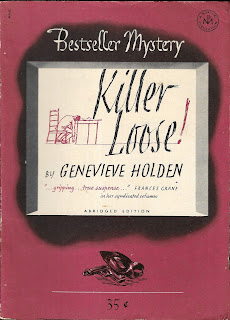 Synopsis (from my edition): One young girl died in an alley. Another, not so young, but undeniably beautiful, was murdered in her bath. The other victims were scattered through the city. And all of them word the trademark of the mad killer--a severed right arm...The police believed the murderer had been caught, convicted, and locked up properly in and insane asylum. Then one stormy night he escaped to do his bloody work on yet another girl--lovely young Janet Milton. Surrounded by police, in unfamiliar country, John Anders nevertheless managed to kidnap Janet and her young nephew. Janet's wiles seemed useless against the determined killer--until he grew careless. Then Janet used her last trick and got away. But she made a terrible mistake...

As I mentioned in my last review, I had randomly picked four books off my TBR stacks and, using just the first line (or lines since I misread punctuation on the one I chose), decided which book to read next. I also asked readers and friends on Facebook which line appealed to them. And Holden's first line was a general favorite. So...I decided to read it as well.

First off, I have to admit that woman in danger novels aren't my all-time favorites, though there are some exceptions, and I am especially not fond of those which also put children in danger. This does both. That's the negatives. On the plus side, we do have the sheriff and the police lieutenant doing some very nice standard detective work to unearth the clues that will point to the real killer and helps them to track down Janet and her nephew Tolly before it's too late. The motive is a little iffy for me--I know that the most inconsequential (to the average person) things might set an unbalanced person completely over the edge, but I still had difficulty with the reasoning.

I did enjoy the two detectives and would definitely be interested in reading a more traditional mystery with either of them conducting the investigation (and no woman/child in danger being tracked all over the countryside). But from what I see on the internet (particularly at Mystery*File), it looks like she preferred Romantic/Gothic suspense-style novels. Still, a good solid mystery of its type. ★★★

First line: The dark gray bowl of sky cracked open; light flashed through the fissures, darted down into the tops of distant trees, whitened the roof of a farmhouse on a faraway hill.

Last line: He hung up, and, turning around to find her still  standing behind him, decided that, all in all, it had turned out to be a pretty wonderful day.

Thanks for including the link to Mystery File about her. My usual sources turned up dry! I re-used your link in your M.E. clipboard for this author.