The Tears of the Singers 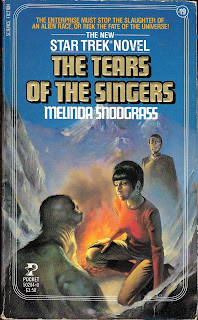 The Tears of the Singers (1984) by Melinda Snodgrass
The Enterprise is at a space station for a little R&R and a mandatory check of the ship. Uhura meets one of the most talented musicians since Mozart and there is romance in the air. But when a space freighter disappears in a space warp near the Taygeta V system, shore leave is cancelled and the Enterprise is sent to investigate. Taygeta is the home of a species of "singers" that has long been hunted for the crystal tears excreted upon their death. Spock proposes that a species that can create music must be intelligent and that the hunting is wrong...and Kirk doesn't disagree, but there are bigger issues to be faced. First, they need to find a way to stop the space warp from expanding further (and engulfing the planet)...then they can save the Taygetians from the hunters.
Before leaving the space station, Spock's research into the Taygetians' music reveals that the songs themselves may be essential to solving the space warp crisis and he tells Kirk that the Enterprise needs a musician to interpret the music. So, Guy Maslin, our latter-day Mozart, is called upon for service (under a little-used Federation regulation) and off they go to Taygeta. Of course, saving the universe wouldn't be everything it could be without the Klingons getting involved too. Kirk's old rival Kor shows up and then they manage a truce (without the need for Organian influence), but there are hard-core Klingons on Kor's ship who might not let their captain be so cozy with earthers. While Kirk and Kor try to keep things calm in space, Uhura, Guy, and Spock work to unravel the song and make meaningful contact with the Taygetians before it's too late.
This is one of the few Star Trek novels to feature Lieutenant Uhura and give her the attention she deserves. She not only helps to save an entire species and their planet, but also helps them save the space-time continuum. The plot makes use of her musical talents as well as her abilities as a language specialist. I enjoyed this one very much the first time I read it (when it was first released and looking back now, it's interesting to know that this book came out in 1984 and featured a rescue through a species' song and it wouldn't be long before Star Trek IV would be released and whale song would feature so prominently. ★★★ and 3/4

Last line: He would probably never hear their music again, but someday, with the help of the three Taygetians who traveled with them, a multitude of worlds would ring with their particular brand of music that sang to the spheres.