Murder Down Under (spoilerish 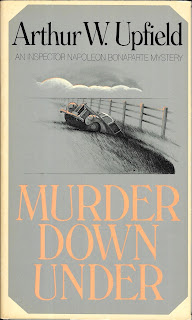 Murder Down Under (aka Mr. Jelly's Business; 1937) Arthur W. Upfield

Inspector Napoleon "Bony" Bonaparte is on holiday in western Australia when he decides to lend a helping hand to a former protégé--on not one mystery, but two. Detective John Muir had made a mess of his last case--suspecting the wrong man and letting the right one get away. And now he's got a mysterious disappearance on his hands. George Loftus, a local wheat farmer, had wrecked his car one rainy night and promptly disappeared into the ether. Many of the townspeople think Loftus has done a bunk--escaping creditors or his wife...or both. About two weeks have passed and he's found no evidence whatsoever in the case.

He's very surprised and happy to see Bony appear in Perth--even if his mentor does give him a bit of a hard time over his last case.

After all my tuition you took a creek without first ascertaining the depth of the water. You accepted a conclusion not based on logical deduction. You ignored science, our greatest ally after Father Time.

But he immediately offers Muir a way to redeem himself. He tells him exactly where to find the real culprit and how best to effect the capture. Meanwhile, Bony is also going to interest himself in the new disappearance. He soon learns that while Leonard Wallace, owner of the Burracoppin Hotel, was the last to see Loftus alive and even admits to having argued with the man, the hotel owner is more likely to murder his wife than a customer. Wallace says that Loftus had given him a ride after sharing drinks in the bar. The missing man was in a foul mood and after the argument had forced Wallace out of the car. That was last he'd seen of him. An investigation of the crash site (even several weeks later) shows Bony that Loftus left the car alive and traveled a bit along the rabbit fence. But what happened to him then? Where did he go and who did he meet? A cigar stub, the remains of Loftus's red notebook, a few ill-advisedly spent bank notes, a dog's successful rabbit hunt, a well-stacked haystack, and buzzing blowflies are the solid clues that will show Bony (and the reader) who done it and where Loftus is now. But the reader should know who did it long before the clues are found...

This is one of the slowest-paced police procedurals I've read in a long time. I know that one of the tenets of Bony's philosophy of detection is patience, but mine was wearing thin by the time we got round to the grand finale. Once we know it's murder (and, of course it was, otherwise why write a whole detective novel about a man running out on his wife and his debts?), it isn't that difficult to figure out who did it and why. Suspects are not exactly thick on the ground. Unsuspecting readers might be tricked into thinking the one other character who's acting a bit oddly is the murderer (for about two seconds), but, honestly, there's not even a whiff of motive. And that character has been acting oddly in just this way for years.

In fact, the mystery surrounding the oddly-behaving gentleman is a lot more interesting than the disappearance of George Loftus. And Upfield leaves some pretty subtle clues to just what exactly Mr. Jelly is up to. Not that I caught on to them, but they are there. I was much more interested in Bony's efforts to clear up that mystery and relieve the minds of Mr. Jelly's daughters. All the points for this book go to the mystery of Mr. Jelly's Business (the original title is definitely better) and to my appreciation of the character of Bony. ★★ and 1/2

First line: If it had not rained!