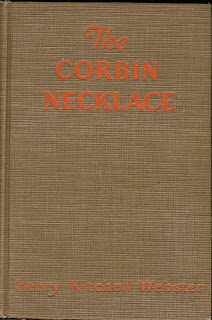 When Mr. Corbin passed peacefully away, he left his widow in complete control of his wealth, including a beautiful pearl necklace worth 100,000 dollars. She loved to play the autocrat and she disliked her daughter-in-law, Violet. It was always understood that her son's wife would have the pearls one day, but when Violet's husband joined his father in the great beyond old Mrs. Corbin kept putting off the passing of the pearly torch (as it were).

So, when Violet's daughter Judy is ready to get married, the announcement appears in the paper along with the news that Mrs. Corbin plans to present it to her granddaughter as a wedding present. The matriarch denies having told the papers so...but neither denies nor confirms the papers assertion. As the day of the wedding approaches, Judy's younger brother Punch is just as sure as shootin' that someone is going to steal the necklace. After all, Gran's safe is about a hundred years old and any thief worth his salt should be able to have it open in a matter of minutes. Well...Punch must have second sight because the necklace is stolen--not once, but twice. And nobody seems to want to hold onto it for long. Judy is nervous as well, but not about the necklace. She keeps looking like she's seen a ghost and goes about hiding little notes she receives from her intended's cousin. Punch thinks it's about the necklace...but our narrator is none too sure.

Mr. Ethelbert Smith, long-time family friend to the Corbins and an expert jeweler, arrives for the wedding and is just in time to help solve the mystery of who stole the necklace the first time. And who brought it back? And who stole it the second time? And where is it now? Our narrator, another--unnamed--family friend who is sidelined with a broken leg, is given all the juicy details by Punch and Judy and Mr. Smith and passes them along to the reader so we can follow the action from all sides. A nice little robbery with little in the way of clues (there's no way you'll be able to name the culprit), but it makes for a fun bit of family mystery and drama...and gives us a view of life in the Midwest in the 1920s. ★★★ and 1/2

First line: "How much do you suppose it's really worth?" Punch wanted to know.

Last line: "No," said Punch contentedly, "I guess she won't."