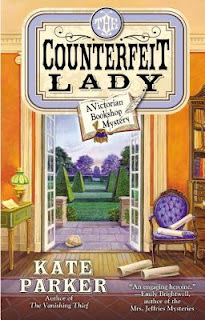 The Counterfeit Lady (2014) by Kate Parker

Georgia Fenchurch and the Archivist Society are back on the job. This time someone has stolen top-secret plans for a brand new British warship. The wife of the designer has been killed, the plans are missing, and Kenneth Gattenger, the designer, has been arrested for murder...and treason. The police believe Clara Gattenger discovered that her husband had sold out Britain to Germany and got killed for her knowledge. But Clara was Lady Phyllidia Monthalf's cousin and she doesn't believe a word of it. She wants the society to find the real killer. The Duke of Blackford also wants Georgia...and the society...to investigate on behalf of Queen and country.

Georgia plays the part of Lady Monthalf's widowed cousin, just arrived home from India, and the duke's latest paramour in order to have an entrance to society. For most of the possible suspects travel in much different circles from a middle-class bookshop owner. Between Georgia's sleuthing and a society member who goes undercover in the Admiralty to look for spies, they soon have more suspects than they know what to do with. Kenneth's eye for drawing aids them in producing a good likeness of the thief...now they just have to figure out to whom he will deliver the plans. And they need to do it before a mysterious stranger blows Georgia's cover.

The mystery itself is a good one. I enjoyed following up all the of the suspects and trying to figure out who was hiding what. They all have secrets, but only one of them is a secret spy. So, the intricate nature of the plot earns high points. The main difficulty is the repetitive nature of Georgia's involvement. I know London's a big a place, but surely to goodness it's difficult enough for a middle-class bookshop owner to pretend to be a member of society once without being found out. And she does it again in this book? And somebody does discover her secret (two somebodies, actually) and doesn't let the cat out of the bag? It's a bit much to swallow. She also found the hidden plans a little too easily--especially considering she was in an unfamiliar house. Oh...and for an experienced member of the society, I did think it odd that she blurted out information to Sir Jonah Denby...even after Blackford said he didn't know him.

I enjoy Georgia and all of the other recurring characters. Her relationship with Phyllidia and Emma is particularly good. When she has her mind on the job (and not wool-gathering over Blackford), she makes a pretty good sleuth. I have the next book in the series and am looking forward to it, but I certainly hope Parker takes the investigation in another direction--no more play-acting as a member of London society, please.  ★★★

Last line: I was not about to give up my quest to see [redacted] hang for murder.

Deaths = 3 (one hanged; one hit on head; one neck broken)

Thanks for sharing this book with the Hist Fic challenge!