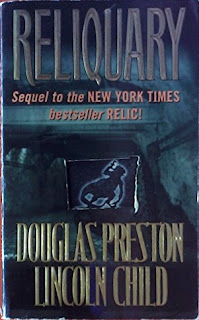 Once again there is something nasty lurking in New York City. In Relic, the terror was hiding out in the basement hallways of the Museum of Natural History. And now something has taken over the hidden tunnels deep below the subway and sewage systems of the Big Apple.

When police divers go down in sludgy waters of the Humboldt Kill, dumping ground of sewers and factories and all sorts of icky waster, they're searching for a dumped cache of heroin. What find are two decapitated skeletons. The first is quickly identified as a missing young socialite, but the second poses a puzzle. The skeleton is malformed and has odd additions to the bones...and yet it still seems to be human. The other worrisome problem with the remains is they seem to have been chewed on. And the teeth marks all seem to be human, although the force needed to make some of the bites indicate humans with abnormal strength in their jaws.

The Lieutenant D'Agosta, heading up the investigation, bring in Doctors Margo Green and Whitney Frock (who helped defeat the terror wreaking havoc in the museum eighteen months ago) to examine the remains and provide what clues they can to the killer (or killers...). And soon Special Agent Pendergast is back in action as well. It isn't long before they realize that something has been preying on the homeless who live in the tunnels beneath the city and only recently has begun working above ground. Their search for answers take them deep underground where they join forces with the leader of the homeless group under Central Park. But there is an intelligence behind the cannibalistic killers and that intelligence has set events in motion that could change human life for good. The team will have to work fast to prevent a catastrophe.

I cannot discuss my reaction to the story without spoilers--those who have not read Reliquary or Relic will proceed at risk of having important plot points revealed.

This was still a page-turner. Preston & Child know how to write a story that will keep you reading. However, I found some of the story difficult to buy into (even while suspending my disbelief about magic plants that turn humans into killers while also giving them rejuvenating powers). For instance, how did Gregory Kawakita manage to get his hands on these plants that miraculously survived? The last remaining specimens were supposedly destroyed in Relic. But granted that he did...how did he and the others manage to get these specimens (which came from the rain forest) to reproduce at a rate to fill the New York City reservoir? Again...it's only Eighteen. Months. Later. Part of that time was spent trying to grow the things in aquarium tanks. A great deal of that time was spent experimenting on the plants. When did he have time to play Farmer Joe out at the reservoir? We won't even go into the fact that the New York City reservoir is exposed to a New York winter for part of that time. And the plants weren't acclimated to winter coming from the rain forest and all. So, yeah. That doesn't seem so feasible.

I'm also amazed at the huge number of altered humans that are roaming around following our megalomaniac doctor. Again, it's only eighteen months later. How many people could two people (I'm counting Greg and the doctor--even though we aren't told that the doctor participated in the early experimentation phase, but we'll pretend that there are two the whole time)...how many people could two men give this drug to and convert into killer humans in such a short time? And finally...I'm sorry, but the ending was disappointing. Dr. Frock just comes across as a megalomaniac Bond villain. Not that I'm opposed to James Bond stories. I've read several and enjoyed them to varying degrees. But I know what I'm getting into when I do so. The "oh you pitiful normal humans" and "now I'm going to rule the world once I recreate it the way I want--Bwa-ha-ha" shtick just didn't play well in this particular venue.

On the plus side, Preston & Child tied this into the previous story well and create a decent mystery that reaches beyond the portions of the story that I had difficulty with. Our main characters are well-drawn and it was fun reading about Green, Pendergast, and D'Agosta again. I enjoyed watching them put the pieces together and the action part of the wrap-was good. A solid story, but not quite up to the level of Relic. ★★★

First line: Snow tested his regulator, checked both air valves, ran his hands along the slick neoprene of the suit.

Last line: Although their conversation remains their own, when they left the restaurant D'Agosta was sporting a large--and apparently relieved--grin.