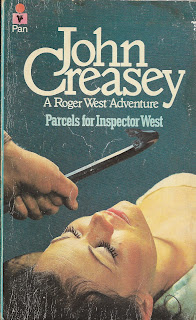 The Christmas rush is on at the post office, but the River Way sorting office is going to be short one employee. Someone has murdered the inoffensive, well-liked Tom Bryant when he was on his way home for an early Christmas party. There have been a rash of postal bag robberies and Inspector Roger West has to wonder if Bryant's death is in any way connected. But then there's also the question of why the postal sorter, who makes less than ten pounds a week, had a hundred pounds in his pocket. The fact that the money was thee for the police to find wound seem to indicate that robbery wasn't the motive.

Then the man's eldest son disappears, someone breaks into his home, and attacks his son's fiancée. What could the Bryants have that is worth killing for? West will need to find out quickly because someone is desperate and ruthless enough that they won't let scruples (their own or anyone else's) get in the way of what they want.

This really is a pretty violent little police procedural (only 157 pages)--what with five people dying from bashing on the head (and several other attacks). But, despite West's focus on the murders, that's not what grabs the attention in the Roger West books. Creasey is terrific with characters and manages to give everyone attention in the short space afforded. We feel like we really know the Bryants--even though some of the family are on stage for extremely brief periods. We become very invested in the family and even more interested in seeing the killers brought to justice.

The police procedure takes the forefront and less emphasis on puzzling out clues. The most interesting one revolves around the fingerprint. And--if readers are more discerning than I, they will spot a clue given early on that points to the solution behind the mystery of the print. It's planted so casually and so well that I don't even think I need to mark this as a spoiler. Another good mystery plot by a master of police procedurals. ★★★★

First line: The police car turned the corner of the ill-lit suburban street.

Last line: He looked at them speculatively as he sipped his drink