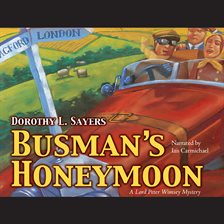 I could have sworn I had reviewed the audio version of Busman's...but apparently not. No review here on the block and no indication of it on Goodreads. Here's my review from the last time I read the hard copy (just a warning....possible spoilers for anyone who hasn't read the Sayers books that precede this one):

So...Lord Peter finally gets the girl. Well, we knew that at the end of Gaudy Night...what with them kissing madly in the middle of Oxford and all. But this one seals the deal. The book begins with the details of the months leading up to the wedding, the wedding itself, and on to the honeymoon. Not that Sayers is so gauche as to reveal ALL about the wedding night, but it's abundantly obvious that our favorite lord and his new lady have quite a nice time of it.

The mystery fun begins the next day when the body of their neglectful host is found in the basement. It soon becomes clear that the reason the honeymoon house was not prepared was because Mr. Noakes has been dead for almost a week. Harriet rather wishes that Peter need not be bothered with all this murder business while on his honeymoon--if only because it will bring the mobs of reporters descending upon them--but soon realizes that his "job" is something they will need to come to terms with if theirs is to be happy marriage.

What follows is, as Sayers notes in the subtitle, A Love Story with Detective Interruptions. We follow Peter and Harriet as they sort out how their love story will begin and in the intervals they pick up clue after clue that will ultimately lead to the discovery of the culprit. However, the point of the story is not the murder. The point is love and marriage and what Sayers thought was the ideal way for two adults to sort things out.

The mystery isn't a very deep one and it shouldn't be hard for anyone to spot the criminal. But the detective story is not the reason I can read this novel (or any of Sayers' mysteries, for that matter) over and over again. I read them for the language and the characters and their interactions. Rereading Busman's Honeymoon, I was struck once more about how delightful the opening chapter is. It is told entirely in letters and excerpts from the Dowager Duchess's diary and I chuckle over it every single time. The voices of the various characters--from Peter's insufferable sister-in-law to the irrepressible Countess of Severn and Thames--are so distinct and vibrant. And the images they convey are such a hoot--can anyone who has read the stories not snort over the picture of the "hell-hound" reporters trying bribe Bunter? Or Peter and Harriet composing rude rhymes in order to get rid of Helen (the insufferable sister-in-law)?

I love this book. And can only regret that it is the last full-length novel written entirely by Dorothy L Sayers. The books penned by Jill Paton Walsh just aren't the same.

Listening to the audio version with Ian Carmichael, I'm still delighted by the opening. What a wonderful way to let us know what happened to Peter and Harriet between the moment Harriet says "Placet" to the moment they head off to their honeymoon. But I also thoroughly enjoyed the scenes with Tom Puffett cleaning out the chimney--absolutely hilarious. And Peter's reaction to the audible evidence of chimney-sweeping going on is gold.

One is afraid to believe in good fortune. The sweep! I crushed down my rising hopes. I said, No--it is a thunderstorm, a small earthquake, or at most a destitute cow dying by inches in the chimney. I dared not court disappointment. It is so long since I was taken into anybody's confidence about a sweep. As a rule, Bunter smuggles him in when I am out of the house, for fear my lordship should be inconvenienced.

I love the image this conjures and the whole exchange between Bunter and Puffett leading up to the actual sweeping is not to be missed. In fact, there are so many little moments in this novel that I can't possibly talk about them all without completely spoiling the plot. You just need to go read it (or listen to it) yourself. ★★★★★ always.

First lines: Mirabelle, Countess of Severn and Thames, to Honoria Lucasta, Dowager Duchess of Denver. My Dear Honoria, So Peter is really married: I have ordered willow-wreaths for half my acquaintance.

Last line: So she held him, crouched at her knees, against her breast, huddling his head in her arms that he might not hear eight o-clock strike.