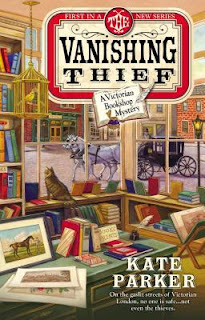 The Vanishing Thief (2013) by Kate Parker
Georgia Fenchurch owns a quiet little bookstore in Victorian London. She inherited it after watching her parents killed before her eye and she makes enough money to keep herself and two women she helped rescue from unpleasant circumstances. Oh...I forgot to mention...Georgia is also a member of the Archivist Society, a secret group of private investigators who look into matters that the police won't touch. She and Sir Broderick, once her father's partner and now the patron of the society, set up detective service to help bring about justice for others. In Georgia's case, it's her way of atoning for her (what she views as) her failure to save her parents and her responsibility for Sir Broderick's loss of mobility. When her parents were abducted, she ran to Sir Broderick for help. They attempted to rescue the Fenchurches from a burning building, but The roof collapsed and Sir Broderick was crippled by a falling beam.
Since then, Georgia has helped investigate cases that brought her shop assistant, Emma, and their honorary aunt Phyllida (formerly Lady Phyllida Monthalf) into her life. The ladies are settled in for a days' work in the bookshop, when a frantic woman by the name of Edith Carter comes to Georgia with a story of an abduction. She claims that the Duke of Blackford has kidnapped her next door neighbor and that blood was left behind in the man's house. But Nicholas Drake's servants deny the bloodstains (which have since been wiped up) and claim that Drake has gone to visit friends in Brighton. She tried going to the police, but they don't believe her and think she's just a meddling busybody. Georgia is a bit doubtful of portions of the woman's story--her vagueness about what she saw, for one thing--but she's sure the woman really cares for Drake and that something happened. But after asking questions of Blackford and his servants, she's not convinced he's responsible.
The Archivists decide to take up the case and they soon discover that Drake was not a blameless character himself. He's been accused of thievery and it looks like he's been blackmailing some very influential society members. The Duke of Blackford has tried to forbid investigation and says he'll handle things, but he's one of the blackmail victims, so it's certainly possible that he could have had Drake snatched. When Georgia and the Archivists refuse to give up the case, the Duke offers to help--but can he be trusted?
Meanwhile, Georgia has had a glimpse of her parents' killer and spends part of her time trying to track him down. She's vowed to bring him to justice, no matter what it costs her. The Duke offers to help her with that as well. Why is he being so helpful all of a sudden? There are several deaths along the way and it becomes even more difficult to discern who is doing what. The trails lead to blazing finale that's all too reminiscent of the fire that killed her parents and while the mystery revolving around Drake is finally cleared up,  Georgia is left with even more questions about the man who killed her parents.
This was an interesting beginning to a new historical mystery series and I do like the Victorian period. Georgia is a fine character and the supporting cast (comprised of her household and the Archivist members) are also well-drawn. I do tire the trope of the clashing male/female characters who will, of course, wind up romantically involved--it hasn't happened yet, but the plot bears all the hallmarks (and I confess to peeking at the blurbs for future installments and, yep, it's gonna happen). Fortunately, the two characters involved are interesting enough that I think I can get over my tiredness.... ★★★ and 1/2 for a strong opening book.

First line: Early spring rain drenched London in a cold damp that either kept customers away or drove them into the bookshop.

Last lines: I knew someday both the Duke of Blackford and the killer would return. I planned to be ready.