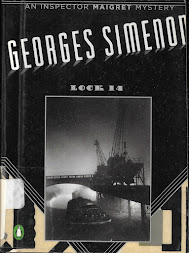 Inspector Maigret is brought in to investigate a murder at Lock 14 on the Marne Canal. A strangled woman is found in the stable's hay at an inn along the waterway. She's soon identified as Mary (Marie) Dupin Lampson, the wife of an Englishman taking a yacht up the canal. Since none of her jewelry has been taken, it looks like a crime of passion. But Sir Walter Lampson, retired colonel, seems very lacking in passionate feelings about his wife and there are few others to suspect. Lampson and his passengers are questioned, as well as the owners and crew of barges that lay nearby--especially those aboard the Providence. It seems odd that the Providence's carter, who normally slept in stables along the way, didn't hear or notice anything that night. But he seems to be a simple soul, incapable of harm. Then a second member of yachting party is murdered and Maigret has to determine what secrets are being kept by all concerned.

I keep reading Maigret books and trying to convince myself that I like them. It's not working so well. It's not that the mysteries are bad--there's a good solid plot here and an interesting character study that could have been even more interesting if I didn't constantly feel like I was missing something. I think one problem may be with translation. For whatever reason, the conversations always seem a bit off and disjointed to me--like maybe the translator left out a word or three because he couldn't figure out what fit best in the context (we'll just leave that out...nobody'll notice). The non-dialogue portions of the story don't seem to suffer as much from this. So, perhaps I'm wrong. Maybe it's just the way Simenon wrote. But it comes across as if his characters have telepathy going on for parts of the conversation and he doesn't feel like he needs to report the portions that aren't said out loud. One thing I've learned about Maigret: Apparently the good inspector is in much better shape than I've previously imagined. He bikes like mad up and down along the canal all through the book. Makes me tired just reading about it. Solid mystery disrupted by the difficulties with the conversations.  ★★ and 3/4.

First line: Nothing could be deduced from the most minute reconstruction of the facts, except that the find by the two carters from Dizy was so to speak impossible.

...it was Maigret's turn to smile at seeing his companion* hunching himself over the wheel like a detective in pursuit of a criminal in an American film (p. 87; *driver of a bakery van)

Last line: And the skipper and his wife had gone off into the town to order mourning clothes.

I gave up on trying more by Simenon many years ago. I read a number pre-blog and I just found them as dull as ditch water. Never been able to get in them. Their brevity was perhaps their one redeeming feature lol