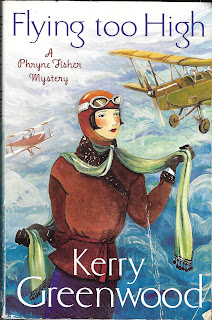 Flying Too High (1990) by Kerry Greenwood

The second installment in the Phryne Fisher mystery series set in 1920s Australia finds Miss Fisher with her sleuthing hands quite full. She's first approached by a very nervous Mrs. McNaughton who is quite convinced that her loud, hot-headed son is going to murder his equally loud, hot-headed father in cold blood. The two have clashed regularly ever since the younger man was born and she has found a note where her son says, "If the pater doesn't come to the party, it will all be up. May have to remove him." She's certain that he means remove him...permanently. Phryne isn't so sure, but promises to look into it.

Bill, the son, is a flying enthusiast and, of course, Phryne happens to be a pretty good pilot herself, so she arranges to run across him at the airfield. She exhibits her rather extraordinary flying skill and throws in a bit of wing-walking as a bonus and has his full attention. That's when she tells him how worried his mother is and can't he arrange to argue with his father somewhere where his mother won't overhear. He promises faithfully to do so.

The next thing she knows, Mr. McNaughton has been bashed over the head with a stone and Bill has been arrested as the handiest suspect. Inspector Benson is a man who likes his theories and once he's decided upon one, he manages to make facts fit it or ignore the inconvenient ones that don't. Phryne asks him several inconvenient questions that he passes off as silly ladies' fancies and goes right on believing that he's found his man. Phryne knows better after spotting two clues at the scene of crime and sets off to prove Bill innocent.

Meanwhile, Candida Maldon, a precocious, head-strong six year old has been snatched as she's on her way home from the candy store. A thoroughly nasty man, a slightly less nasty woman, and her less-than-enthusiastic-about-the-whole-thing boyfriend have kidnapped the girl because her father has recently won 10,000 pounds in a sweepstake. And they think he needs to give them half the proceeds. Mr. Maldon's good friend Jack Leonard has heard about (and met) the fabulous Phryne Fisher and suggests that they call upon her to help get Candida back safely. Phryne devises a cunning plan involving an airplane, luminous paint, and a perilous ride (for her) on the back of the culprit's car to track the kidnappers to their hideout. Naturally, since Phryne is the grown-up version of Nancy Drew, her plans to free both Bill and Candida come off and the bad guys are caught and get their just desserts.

Another fun adventure which combines very nice detective work in the McNaughton case with a thrilling car chase in the Maldon kidnapping. We get lots of Bert and Cec as they are sent to track down clues in the former while Phryne lays her plans to thwart the kidnappers. This second installment in the series also introduces us to Mr. and Mrs. Butler and shows us how they acclimate themselves to their rather unusual employer. All in all, a very good entry in the series. ★★★★

First line: Candida Alice Maldon was being a bad girl.

Last line: "You've gone and lost me my murder."