The Body That Wasn't Uncle 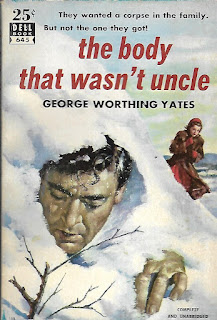 The Body That Wasn't Uncle (1939) by George Worthing Yates

Miss Katheren Meynard, a successful literary agent, receives a plea for help from the family of her godfather. Rosalie Small, her husband Charles, son Cedric, and father-in-law Sidney (the godfather) are in desperate straits and need a loan to meet bills. Katheren is always ready to help out Rosalie and heads to New Jersey to contribute to the cause. But it's a wasted trip--Sidney is too proud to allow Rosalie to accept the money.

The next morning Katheren rushes towards the train station to catch the first train to New York City and her job when she stumbles across a dead man in the snow. Being a dutiful citizen, she reports it to the police--little knowing the trouble the tramp (as she thinks of him) will cause. First, he's an unknown who asked the way to the Smalls' house when he arrived at the train station. Then Sidney identifies the man as his long-lost brother Stephen. What is first accepted as death from exposure is discovered to be poison and suddenly Sidney decides to fess up and say that he only claimed it was Stephen so they could collect the $50,000 in insurance--and get themselves out of debt. And he'd rather be arrested for attempted fraud than murder. But the police aren't buying it. They insist the man really is Uncle Stephen.

A monogrammed lucky horseshoe seemed to guarantee that it the police are right. Yet the man's dentist comes forward and says it isn't Stephen Small. That appeared to settle it...until Small's common law wife and partner come forward and positively identify the body as the big-time gambler. It's to their advantage that Small be declared dead--just as much as that insurance policy could help out Rosalie and company.

Katheren was pretty sure (from the start) that the dead man wasn't Stephen and that Sidney, the crafty old devil, was really only trying to pull an insurance fast one. She's also sure that Sidney didn't kill the man. But if he didn't, who did? She asks Hazlitt Woar, a British detective of her acquaintance, to look into matters and he winds up sending a telegram to a dead man

Urgent proof needed of your existence.

But when he doesn't get a reply, he tries something even trickier...he sets out to discover who out of 150,000,000 Americans sat beside the soon-to-be corpse in the train's restaurant car and offered him a drink laced with atropine?

This starts out very strong. Yates opens with a light and humorous touch and I was all set to settle down for a fun, comfortable ride with plenty of witticisms. Katheren won me over immediately and I had high hopes for her interactions with Hazlitt. But then it kind of died--just like the body in the first chapter, it just sat down in a snow drift and expired. The middle drags and the back and forth business over whether the body was uncle or not just got old. Even adding a few more deaths didn't spice things up much. The ending was exciting enough, but it lost some of its impact after the long, dragged out bits. And I didn't much care for the district attorney's vindictive attitude towards Katheren and Hazlitt. Bit of a spoiler here: It seemed contrived just to bring Katheren and Hazlitt to the alter (you'll understand if you read it) and give them a happy ending. ★★ and 1/2 (I had anticipated a much better rating)

First line: The first manifestation occurred on the seventeenth of December.

Last line: It was the spring of the year, an unsettling time for everybody. [Which I feel could also make an excellent opening line.]

I love to read old books like this. When I start I always have high hopes that I'll find an unknown gem, but like you with this one, I usually end up disappointed. It's why Christie is still read, and Yates is all but forgotten.

But I still love reading books by him and all the others like him.

Oh, yes, I love these old books. And occasionally I do find a gem (for instance, Midsummer Nightmare by Christopher Hale earlier this year). And these digest-sized books have incredible covers too.

The beginning of this one sounded very appealing, so it is a shame that it didn't live up to expectations. Better luck next time!