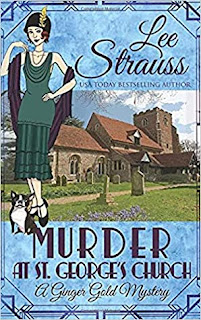 Ginger Gold's friend, the Reverend Oliver Hill, is finally ready to settle down with a wife. The church is decorated and the choir gathers for a final rehearsal before the big day--with Ginger and her friend Haley making up two of their numbers. But all is not well at St. George's Church. During an intermission in the rehearsal, the choir director, Mr. Theodore Edwards, plunges to his death from the organ loft in the balcony. He had gone up there to berate his wife (once again) over her poor organ-playing skills. When Haley examines him while waiting for the police to arrive, she discovers that Edwards was struck with a blunt object before he went over the balcony railing. This is not accident, it's now a case of murder.

When Scotland Yard shows up, Ginger is astonished to see Chief Inspector Basil Reed. At the end of the last book, Basil has been placed on leave due to his behavior during the investigation of the murder of his estranged wife and he had taken himself off to South Africa to "find himself" (my term, not his). Ginger was hurt at the way he left and the fact he had not written while he was gone. He hadn't even bothered to tell her that he was back and reinstated. So...she's been stepping out with the handsome Captain William Beale. In fact, Captain Beale has asked her to marry him. She likes the captain, but he just doesn't make her heart skip a beat like some people...Oh wait, we're still hurt and mad at him. Things are about to get complicated on the romance front for Lady Ginger Gold, 'cause Captain Beale knows what he wants...and so does Inspector Reed. But does Ginger?

Anyway...so Ginger finds herself uncomfortably working with Basil again. The circumstantial evidence seems to point to Mrs. Edwards and Basil's superior officer instructs him to arrest her. Mrs. Edwards insists she's innocent. She may not have liked her husband much, but she is no killer. So, she hires Ginger to look for the real killer and clear her name. Ginger and Basil soon learn the Edwards was a philanderer with a taste for younger women. Could one of his conquests have done him in? There are also a few men interested in some of the choir members, perhaps one of them killed the director to protect a young woman's honor.

So...in my review of the previous entry in the Ginger Gold series I mentioned that there were two things about the series that were wearing thin. We seem to have taken care of item number one--the on-again, off-again romance between Ginger and Basil. It looks for all the world like they're finally going to get married. So, yay for that. The second problem (the chattering, self-absorbed, immature young woman in Ginger's life) also gets resolved, but none too soon.We get almost a whole book of Ginger's half-sister whining about being bored, making her maid's life a misery, and saying the most obnoxious things she can think of. You can't imagine my relief when Louisa suddenly announces that she's going back to America. Can I help you pack? Don't let the door hit you on the way out. Seriously, she was even more annoying than Felicia was before Strauss had her grow up a bit and that didn't seem possible. And, quite frankly, she served NO purpose in the story line other than to be annoying. I just hope we don't pick up yet another whiny little secondary character in the future.

The mystery is fast-paced and nicely plotted. I did spot the killer fairly early, but that didn't ruin my overall enjoyment. And, while Ginger may exasperate me at times, I do genuinely like her character and enjoy following her adventures. ★★★

PS: And may I just say that I'm none too happy about where this story has taken Haley. I was thinking we weren't seeing enough of her in these last two books...I guess Strauss was just preparing us her to head home.

First line: "Lady Gold, will you do me the honor of being my wife?"

Last line: Besides, what harm could befall them on a train?