The Nine Billion Names of God 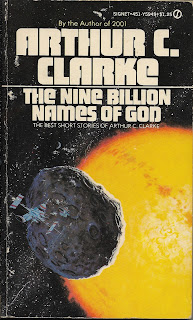 This was, as far as I can remember, my very first taste of Clarke when I began my exploration of classic science fiction in the 80s. The first (and title) story is a knock-out. "The Nine Billion Names of God" and "The Last Question" by Isaac Asimov are my two all-time favorite short stories in science fiction. "Names" hooked me on Clarke and made me search out his other work--from the Space Odyssey books through The Tales from the White Hart. Clarke's longer works are well worth reading, but he was an absolute master of the short story and this collection is a great introduction to him. ★★★★★

"The Nine Billion Names of God": This title story is a stunner. All about monks who want to use technology to speed up their sacred task. The last line is absolutely perfect. I loved this story when I first discovered Arthur C. Clarke and it still resonates with me.

"I Remember Babylon": Clarke places himself as the narrator of this cautionary tale about the dangers that might come with the convenience of satellite transmissions. Those who use propaganda and information as a weapon are always eager for a new method of attack.

"Trouble with Time": A clever little mystery about a Martian robbery that goes wrong. Makes a play off of a key plot point from Verne's Around the World in 80 Days.

"Rescue Party": Aliens from another part of the galaxy head to Earth on a rescue mission when the scientists of their federation determine that Sol is going to go nova. When the ships arrive, they are confused to find evidence of primitive (by their standards) technology, but also evidence that the inhabitants may have escaped by rocket ship. In the middle of their mission, part of the alien crew gets caught in the humans' underground travel system. Will the rescuers be rescued in time?

"Summertime on Icarus": Scientists have always wanted to get a closer view of the sun--but if you get too close, you'll burn alive. Our narrator is part of team who is sent to Icarus (an asteroid that will pass near the sun). They plan to set up instruments on the side that will face the sun and scurry to the dark side before it's too late. And then something goes wrong with the mission...

"Dog Star": A story about an astronomer and the dog he rescues...and who rescues him--twice. The second time is after death (the dog's) and far away on the moon.

"Hide & Seek": A spy in the interstellar wars manages to out wit the commander of a huge battle cruiser by playing a little game of hide and seek on Phobos. The commander's superiors never could understand why the commander of the fleet's fastest ship couldn't catch a lone man in a space suit.

"Out of the Sun": Another story about observing the sun--this time from the surface of Mercury. This time astronomers are left wondering just what exactly is in those solar flares that erupt from the sun? Is it possible that the energy released is the energy of life?

"The Wall of Darkness": A story of the single planet revolving around a lone star. A wall of darkness lies at the edge of the habitable region of Shervane's world. And when he learns of it, he becomes determined to find out what is on the other side. Legends say madness lies there. Sometimes, legends hold an element of truth...

"No Morning After": A second story about intergalactic beings making an effort to rescue the human race. This time the humans are still on Earth, but only one man is in a receptive state of mind to receive their telepathic messages. And he thinks they're just the after-effects of a bottle of whisky.

"The Possessed": Clarke comes up with an interesting reason behind all those lemmings jumping into the sea.

"Death & the Senator": Senator Steelman receives two shocks. The first is when, in the months leading up to a possible bid for the Presidency, he's told he's going to die. The second occurs after he has made peace with the fact that is time is running out...only to be told that a new treatment, requiring him to spend time in space, could save his life. Has one the two best last lines in the collection.

"Who's There?":  When a space station supervisor is told there is a stray object floating about that needs retrieving, he's the only one available to do the job. It should be just routine, but what are those weird noises coming from his space suit?

"Before Eden": Earthmen are finally investigating Venus and are surprised to find flowing water at the South Pole (the coolest part of the planet). The biologist is excited to think that they may be there to witness the beginnings of life on the Venus. But will their presence change the course of Venus's history? This is a cautionary tale about how even the smallest change in an environment might cause great harm.

"Superiority": A story of David and Goliath on an interstellar scale. The more primitive race takes on those whose weapons are superior, but sometimes giants do fall. And sometimes they even trip over their own feet.

"A Walk in the Dark": Robert Armstrong is making his way from camp on an unnamed planet to Port Sanderson where he will catch a ship for home when a series of accidents impedes his journey. First his tractor transport breaks down. He fixes it. It breaks down again. He decides to walk the four remaining miles and sets off with a flashlight. The flashlight goes out. And now he must make the journey in total darkness. Feeling his way along to keep himself on the narrow road. And then he remembers the tale told by the old Base clerk at Port Sanderson about his walk in the dark and the sound of clicking claws he heard...

"The Call of the Stars": A man who left his father behind on Earth in order to be among the first on the space station watches the twentieth century turn into the twenty-first from space. He also prepares to watch his son leave him behind to head out on a mission to Mars.

"The Reluctant Orchid": A timid young orchid-grower by the name of Hercules is managed by an overbearing aunt. He discovers a carnivorous breed of orchid and imagines a life without his aunt...

"Encounter at Dawn": A survey starship with a three-man crew lands on a distant planet much like their own. There they find a bipedal race also much like their own but at a much earlier point of development and they wish they could stay and help the beings lift themselves towards civilization more quickly. [Clearly no Prime Directive in force here...] But they must leave to tend to their own civilization. They wonder what these beings will become.

"If I Forget Thee, Oh Earth...": Colonists on the moon are the last human beings left after a nuclear war on their home planet. Each generation is taken to a particular place in the colony to look on the Earth and be reminded that the colony must survive so that one day, when it's safe, they can return and reclaim their home.

"The Sentinel": The story from which 2001: A Space Odyssey grew. Explorers on the moon find no sign of intelligent life ever having been there before man...Until they find a lone relic high up in the mountains. The narrator speculates that an ancient alien race placed it there, watching to see if intelligent life ever emerged from the cradle of the Earth.

"The Star": A Jesuit priest/explorer suffers a crisis of faith when the exploration team discovers the protected records of an earth-like civilization lost when their sun went supernova.

First line (1st/title story): "This is a slightly unusual request," said Dr. Wagner, with what he hoped was commendable restraint.

He was still marveling at the narrowness of his escape when his time ran out and Death fell softly from the summer sky. (p. 142) [I think Clarke excelled at last lines. This is a marvelous ending to "Death & the Senator."]

Last line (next-to-last story--if I give the last line of the last story, it will spoil it): For man had come and gone.

Is this the one about the mad monks who build a supercomputer, and which ends with the stars going out? If so, we had to read in seventh grade; it's stuck with me. Didn't like it, though. It was part of a science fiction module in English, and all the stories were downbeat. There was one about a bloke who woke up in the future, he was a multibillionaire, but thanks to inflation, money was worthless. There were a few about nuclear holocausts. Very different from Doctor Who / Star Trek / Star Wars. Not much fun.

Nick: You've got the right story. And, yes, end of the world stories aren't fun--but they can be very thought-provoking and written very well. And I think Clarke writes extraordinarily well.