The Body in the Vestibule 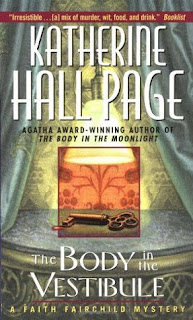 The Body in the Vestibule (1992) by Katherine Hall Page

Faith Fairchild--clergyman's wife, caterer in a small New England town, and sometime amateur sleuth, is off to France. Her husband has the chance to do research for his doctoral dissertation at the Université de Lyon and she will be able to learn about French cuisine first hand for a cookbook she is writing. And she will be able to turn sleuth if the occasion calls for it, which, of course, it soon does.

After accepting dinner invitations from several of their new friends, Faith that it's time she and Tom throw a dinner party of their own. The party is a big hit and so is the bouillabaisse prepared with as many varieties of seafood as she can find. Long after the party, Faith is having difficulty sleeping (as many an expectant mother does during pregnancy) and realizes that the smell from the remains of the lobster and shrimp shells is affecting her adversely. She decides to get the garbage out of the house right then and there. She drags the garbage bags down to the vestibule and the rubbish bins, only to find the body of a clochard (beggar) in the large bin. She awakens Tom and by the time the police arrive the body has disappeared.

The police are rather condescending to the "poor little pregnant American lady" and think she must have mistaken a sleeping man for a dead one. But Faith has run into death several times and knows a dead body when she finds one. Now she has two mysteries on her hands. Who killed the clochard--and why? And where is the body now? One of the Fairchilds new friends is also friends with a more intelligent policeman, but he is unavailable when Faith discovers the biggest clues and then promptly disappears herself. She may solve the mystery--but will she lose her own life in the process?

It has been a while since I've read any of the Faith Fairchild series and I have to say that I recall the others as being more interesting and a little less dark. The killer really is ruthless and only hesitates to kill Faith straight off because she's pregnant. [I honestly don't get why the killer has scruples about the unborn baby. As little conscience as s/he has, I can't imagine them being bothered about taking two lives rather than just one.] The initial plot line is solid and the motive behind the murder of the clochard makes sense. It's a little harder to see how the plot leads to the kidnapping of Faith....but if that didn't happen she wouldn't find out for sure who the killer was.

The setting was very nice, though it would have been even nicer if we'd gotten a bit more description of the city of Lyon and the surrounding area. Overall, a fairly decent mystery which could have used a bit of tightening up plotwise. ★★★

First line:  There are many ghosts in the city of Lyon.

Last line: And far away from France, on this particular day, September sixteenth, a baby adds her first cries as l'heure bleue passes.

Deaths = 2 (one poisoned; one drowned)