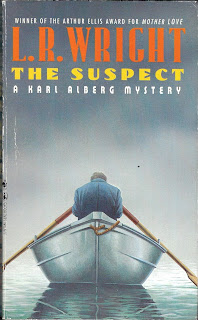 Wright's book is an inverted mystery. We know from the outset that eighty-year-old George Wilcox has bashed his not-so-very-near neighbor Carlyle Burke over the head. What we don't know is exactly why and whether or not Canadian Mountie, Staff Sergeant Kurt Alberg will discover the evidence to prove he did it. Oh, we have a vague sense of the trouble between the two men--something about Wilcox's sister and some dark secret about Wilcox that Burke was about to blurt out. But it will take the entire book to get all the details.

Wilcox didn't go to Burke's house that day with murder in mind. If he had, well, as he says in a posthumous letter to Alberg

But he didn't plan it. Oh, he never like Burke. Not since he first met him. He'd always stayed out of the man's company as much as possible and kept the irritation to a minimum. And then Burke called him and asked him to come visit. He told Wilcox he thought he was dying and had something he just had to say to him before he died. And for whatever reason Wilcox went. Burke talked...and wouldn't shut up. So, Wilcox picked up a handy little WWII souvenir and bashed the man over the head.

At first he just assumes the police will catch him, but then he realizes that he just might get away with it. So he grabs the murder weapon and its match (it's one of a pair of shell casings) and heads home. He deals with what blood stains he's acquired; has a bit of a nap; and then arranges to discover the body. From then on it's a cat and mouse game between Wilcox and Alberg...along with Wilcox's wrestling match with his own sense of justice. He knows he's committed murder and shouldn't get away with it...and, yet, he also feels justified in having dispatched Burke. It's an interesting psychological study and description of the whys of murder and the "what happens next" of investigation and cover-up.

I am not a huge fan of inverted mysteries. I much prefer being presented with the evidence, clues, and suspects along with the detective and then trying to beat him or her to the solution. But I have to admit to the power of the characterization and the motivations behind the crime. It was, I am sure, even more powerful for the time it was written. If I found inverted mysteries as compelling as the characters, then I would have been willing to up the rating a bit. ★★★ and 3/4

First line: He was a very old man.

It's a good thing, in the main--responsibility. But I've a feeling, now, that you can carry it too far, or get it all wrong. (George Wilcox; p. 181)

Last line: He grinned. "I'll be right down."