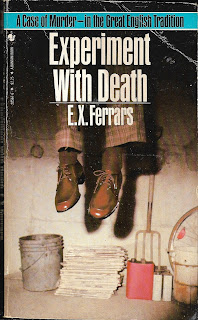 Guy Lampard, the Director of the King's Weltham Institute of Pomology, is a two-sided coin. To those he likes and those he can play Lord Bountiful to, he is a great man. He can be kind and generous--helping out a colleague whose wife needs to be kept in an expensive healthcare facility, for instance. But Dr. Jekyll has his Hyde and so does Lampard. To those he dislikes, he is everything from a mere hindrance to evil incarnate. He takes great delight in pitting certain colleagues against each other and watching the feathers fly. And when he hires an old "friend" Sam Partlett to join the institute, it becomes apparent that he just missed tormenting Partlett. Partlett is susceptible to alcohol and can get quite violent when in his cups. Lampard loves pouring the drinks and then watching the fur fly.

When Lampard is found in his office with his throat cut, there are plenty of suspects--from Partlett to Bill Carver who was passed over for the position which Partlett was given to Roger, the Assistant Director, who some say was competing with Lampard for the affections of Dr. Emma Ritchie (and who the police seem to think would just step into the Director's shoes now that they're empty) to whomever Partlett thought was pilfering the drug supply and selling barbiturates on the side. But having plenty of suspects doesn't help when everyone seems to have an alibi and no one can explain who changed the clocks in the various labs and why. The police seem to have chose Roger as the hot favorite. Emma is sure that Roger didn't do it and Roger thinks he knows who did but can't see where the proof is. And then there's another death and Roger asks a simple question. He thinks his solution answers that question...but Emma isn't so sure.

An interesting closed circle mystery with an academic feel even though the institute isn't, strictly speaking, an academic institution. It is a research facility focused on apples--though it really could be any school or research center with the standard allotment of jealousy and grievances. We throw "pomology" about when speaking of the institute, but the only real reference to the work with apples is the running theme of Emma trying to write an article on the effects of carbon dioxide concentrations on apples (and not getting very far...). Otherwise, the purpose of the facility is pretty irrelevant to the story.

The issue of the clocks is a clever twist on the whole "change the time" thing. When is an alibi not an alibi and yet can prove that someone didn't do it? Ferrars is a competent plotter and produces an accurate portrayal of the insular world of the research facility. But somehow her books always lack a certain something that would propel them into the four or five star range. They're good, solid mysteries but the characters, while given distinct personalities, just don't make you care all that much about them. ★★★

First line: At a few minutes before half past three on a drizzly afternoon in early November, Mrs. Fallow, whose function in the King's Weltham Institute of Pomology it was to oversee the cleaners and various other domestic matters, carried the tea urn into the common room to which the members of the scientific staff could come for a cup of tea, if they felt so inclined.

Last line: And now all that she wanted was something of which she knew there was no possibility whatsoever, a quiet evening alone with Roger.

This one is a good one. I enjoyed your take on it. Here's my review of it, in case you'd be interested, posted not too long ago: