The Case of the Gilded Lily (spoilerish) 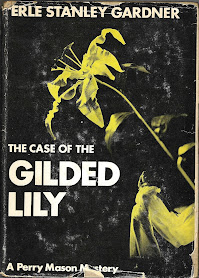 The Case of the Gilded Lily (1956) by Erle Stanley Gardner

Full confession. I didn't read every word of this one because, unfortunately, the story just did not grab me. I started it for a challenge I was doing, but had to change my selection (for the challenge) because I knew I was going to be skimming. And I did--skim that is. Just so I could actually use it for a few other challenges and so I can move it permanently off the TBR pile.

I have an on-again, off-again relationship with Perry Mason. When I was younger, I didn't care for the TV show and, later, when I started collecting the pulp-era, digest-size mysteries I seemed to run across tons of Erle Stanley Gardner books. Probably because he wrote tons of them. So, I decided to give Perry a chance in print and have found that I have to be in the right mood for him. I don't think I am right now--the whole Burger & company objecting to everything Perry does in the courtroom thing seemed really irritating this time. Especially when I knew Perry was going to win.

The story line isn't all that compelling either. Rich older guy marries beautiful, younger woman. Woman has shady past. Bad guys decide to blackmail the rich guy based on the little woman's tarnished halo. Blackmailer gets bumped off and the rich guy is suspect number one and on trial. Perry's his lawyer--so you know he's going to get off and there will be a surprise reveal at the end about who really did it. And the real culprit was a real disappointment. At least to me--I would have found it much more satisfying if the rich guy's secretary (who he dumped in favor of the younger gal) had thought this all up so she could set the young wife up to take the fall and then she could comfort the rich guy when the little woman was convicted. But no. Definitely not one of my favorite Perry Masons. ★★

First line: Stewart G. Bedford entered his private office, hung up his hat, walked across to the huge walnut desk which had been a birthday present from his wife a year ago, and eased himself into the swivel chair.

Last line: Mason's answer was laconic. "Just write thanks underneath your signature when you make out the check."

"Just write thanks underneath your signature when you make out the check." - perhaps Gardner used that same line with his publisher! :-)