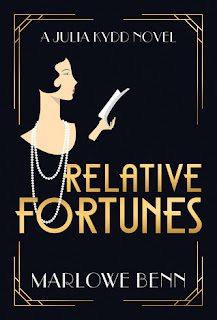 Synopsis (from the book flap): In 1924 Manhattan, women's suffrage is old news. For sophisticated booklover Julia Kydd, life's too short for politics. With her cropped hair and penchant for independent living, Julia wants only to launch her own new private press. But as a woman, Julia must fight for what's hers--including the inheritance her estranged half brother, Philip, has challenged, putting her aspirations in jeopardy.

When her friend's sister Naomi Rankin, dies suddenly of an apparent suicide, Julia is shocked at the wealthy family's indifference toward the ardent suffragist's death. Naomi chose poverty and hardship over a submissive marriage and a husband's control of her money. Now, her death suggests the struggle was more than she could bear.

Julia, however, is skeptical. Doubtful of her suspicions, Philip proposes a glib wager: if Julia can prove [to his satisfaction] Naomi was in fact murdered, he'll drop his claims to her wealth. Julia soon discovers Naomi's life was as turbulent and enigmatic as her death. And as she gets closer to the truth, Julia sees there's much more at stake than her inheritance...

My take: There are several things to like about this historical novel. The time period, for one--Jazz Age America is an appealing setting for me. In this first novel, Benn doesn't make quite as much out of it as she might have done, but overall a good showing. Julia is, in the main, a great main character. I really like her--except when she's bickering with Philip and when Benn makes her shrill. In fact, most of the female characters turn shrill when they're upset. The shrillness was rather tedious, surely to goodness these women have different personalities and just might react in ways other than shrill when they're angry. The plot is pretty interesting. We know the family is covering up--but we have to figure out just what it is they are covering. Is it merely an unpleasant suicide? Perhaps Naomi's last effort to bring shame to her unpleasant relations? Or had one of her relatives had enough of her and so decided to end the outrageous behavior permanently. There's a nice little twist to the motive.

But...I'm still trying to figure out why Benn dragged in Willard Huntington Wright, other than to keep pointing out what an obnoxious man he supposedly was. Supposedly, we're setting up the idea that Wright (as S. S. Van Dine) based Philo Vance and his friend Markham on Philip and the lawyer Jack Van Dyne. That's fine. That's just dandy. Okay...then make Philip the detective. And funnel the tidbits about the murder to Wright so he can slap together his first detective novel. But--no. Julia is the amateur detective and the whole solution is hush-hush, top secret and Wright never learns a word of it. He just wanders on scene periodically so Philip can talk about what a nuisance he is and Julia can despise him. Wright serves no real purpose.

And back to Philip--he really is a piece of work. Putting Julia through the mill over her inheritance because he was bored and wanted to spice things up? And then prolonging it because she wouldn't just let him run roughshod over her and he thought she was a worthy adversary? Really? It just didn't go down well.

I can see the makings of a good series. IF we ditch the whole Wright thing. There's a nice bit at the end which promises that Philip may just turn over a new leaf and maybe he'll become tolerable if he shows up in future installments. ★★ and 1/2 --with hopes that future stories will build on good bits.

First line: Two bankers--one gray and stout, the other pink and merely soft about the jowls--conferred in low voices outside the office door, flicking pained glances through the window's gold lettering.

Last line: "Would you happen to know how I might go about registering to vote?"