Stories Not for the Nervous 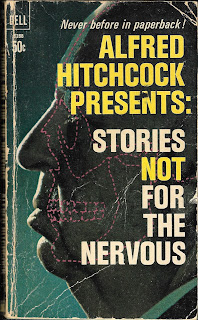 Another collection of stories "presented" by Alfred Hitchcock (with an intro from Hitch and everything...). This collection is billed as particularly cold-blooded and disturbing and definitely not for the faint of heart or the easily spooked. Personally, I don't think they're all that chilling even though the mysteries are generally solid and interesting. ★★★

"To the Future" by Ray Bradbury: A man and his wife, fugitives from the future--a future full of war and disease and despair--hope to find refuge through time travel to the year 1938. [Deaths = one hit by car]

"River of Riches" by Gerald Kersh: An Englishman walks into a bar, meets a smooth-talking fellow countryman with tales of riches in South American, and walks out again with gold. Or does he? [Deaths = one eaten by alligator]

"The Man with Copper Fingers" by Dorothy L. Sayers: A story of jealousy and a well-known sculptor's plan for revenge. Fortunately, Wimsey is on hand to prevent the artist from completing the second half of his masterpiece. [Deaths = two poisoned]

"Levitation" by Joseph Payne Brennan: A hypnotist dies of a heart attack in the middle of his levitation performance. What happens when a hypnotized, levitating man has no one to tell him to come down? [Deaths = one heart attack]

"Miss Winters & the Wind" by Christine Noble Govan: Miss Winters believes the wind to be evil and that it is out to get her. She may be right... [Deaths = one fell from height]

"The Dog Died First" by Bruno Fischer: The only way Dot Hall will be able to escape a murder rap is to convince the cops that she really did kill. [Deaths = one hit on head; one shot]

"The Twenty Friends of William Shaw" by Raymond E. Banks: William Shaw had always been generous with his friends. Now his butler has been sent to ask them all for a little favor in return. But our narrator isn't quite sure about what's being asked of him... [a death, but no cause given]

"The Other Hangman" by Carter Dickson: A man is convicted (on circumstantial evidence) of the murder of his partner and sentenced to hang. New evidence appears...but will it save him? [one hanged; one beaten to death]

"Dune Roller" by Julian May: An ecologist is studying life in the tide pools of Lake Michigan when he discovers the reality behind local legends of a ravenous beast that comes from the lake "in search of a man" to kill...and then retreats until its hunger forces it from the lake once again. [Deaths = one burned to death]

"No Bath for the Browns" by Margot Bennett: The Browns manage to find a house in London when houses are scarce. But the bath is most inconveniently placed. When they decide to move the the bath, they get a terrible surprise... [a death, but no cause given]

"The Uninvited" by Michael Gilbert: Mr. Calder and Mr. Behrens are old hands at the Great Game of spying. One of Mr. Calder's foes is planning to pay a surprise visit...the two elderly men may have a surprise or two of their own. [Deaths = one hit on head; one shot]

"The Substance of Martyrs" by William Sambrot: A mystery only in the religious sense. A golden crucifix is said to be the source of miracles. Does the power of the crucifix come directly from heaven or does it take a detour through the blood of the fallen?

"Don't Look Behind You" by Frederic Brown: Two men run a counterfeiting business in New York City and it's going well until one of them gets murdered. Then things start to get interesting for the remaining man...[one shot]

First line (1st story): The fireworks sizzled across the cool-tiled square, banged against adobe café walls, then rushed on hot wires yo bash the high church tower, while a fiery bull ran about the plaza chasing boys and laughing men.