And Left for Dead 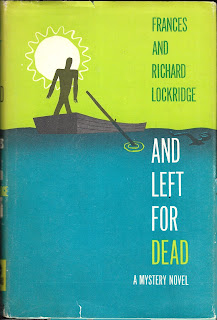 And Left for Dead (1961) by Frances & Richard Lockridge

Will the real Mary Smith please lie down? And die...preferably.

Someone keeps trying to kill Mary Smith. The first attempt left her for dead on the wrong side of New York City. But her head was harder than her assailant thought and she woke up several weeks later, healing from a "depressed fracture." She returns to her apartment to find a man living there. He's former investigative reporter, turned novel writer, Martin Hale. When she asks what he's doing in her apartment, he replies, "renting it." And when she tells him her name is Mary Smith and that the apartment is hers (and where is all her things, by the way...), he smells a story. He's just not sure whether she's cooked one up or if there is more going on than even she realizes. After all, just after she says she was admitted to the hospital, a woman by the name of Mary Smith was beaten to death in that apartment. She was beaten so severely that she couldn't really be identified, though the general description--height, weight, hair and eye color--seemed to be right.

For whatever reason, his instinct is to believe her. At least for now. Then she's attacked again while in the apartment. This time a bag of shopping blocked the blow and Marty's immediate arrival caused the assailant to flee. Now it really looks like there's something to her story. Especially when she finally reveals who she is. Oh...she's really Mary Smith all right. But not just any Mary Smith--a very famous one who is missing. Now they just need to find out who wants this Mary Smith dead and why. When Mary disappears, Martin enlists the help of his friend Bernie Simmons, assistant D. A. There are some doubtful characters hanging about who seem awfully interested in Mary--a private eye and blond man who has been identified as a former jailbird. Will Marty and Bernie be able to find her before the killer becomes "third time lucky"?

This is another of the more suspense-driven stories by the Lockridges. They're just not my favorites. I think I was more inclined to read this girl-in-trouble/on-the-run; unknown threats; menacing people from the past kind of nove when I was younger. But as I've grown older, it just doesn't appeal as much. Give me a nice little murder mystery with suspects and clues and detectives--oh my! I do like that this one brings in Bernie Simmons and Detective John Stein...as well as Trooper Crowley from the Heimrich books. It would have been nice to have more of all of them, but they do make appearances when it counts.

As is generally the case, the Lockridges write with a light touch, so even the menacing atmosphere isn't quite so menacing. We've got a personable young man all interested in our girl in danger--so, of course, we know that everything will be all right in the end. The wrap-up is a bit contrived, but since it is happy I shan't complain. ★★★ and 1/4

First line: It had been easy to walk out of the enormous hospital, once she decided to walk out.

Last lines: "Yes, you could, Marty," Mary Smith said. "You could come and get me."

Deaths = 3 (one beaten; one shot; one poisoned)