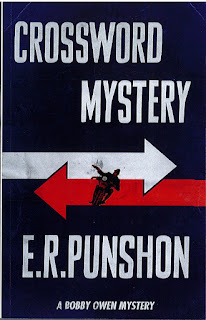 Detective-Constable Bobby Owen is assigned undercover duty to protect a businessman who believes he's in danger. George Winterton's brother Archibald drowned in what was determined to be a swimming accident. But George is convinced his brother was murdered. There just can't be any way that such a champion swimmer could have drowned on such a calm day. So, while keeping a watchful eye on George, Bobby is also tasked with re-investigating the drowning (but strictly on the q.t.). He's got quite a bit to deal with--George refuses to give any real assistance to his protector (like reasons why he thinks his brother was killed and why he might be in danger OR whom he suspects OR anything useful like that); the alert little Airedale who barks at strangers has gone missing; and there are mysterious meetings in the dark. Then the dog's body is found and it isn't long before master follows his canine in death and this time it's definitely murder.

This is a rather dramatic little story. There is a running Shakespearean theme (almost a joke on the part of Superintendent Mitchell); there is the highly theatrical (really gruesome) death of the villain at the end; there is the somewhat farcical emphasis on two points which ought to make the motive and the culprit plain--especially to those who frequently indulge in mysterious reading. In fact, the overly-dramatic aspects of the story really didn't work for me all that much--in part because our supposed hero, Bobby Own (after all, his is the only name mentioned in the blurbs on the book and the series is labeled "Bobby Owen Mysteries), is not nearly the super sleuth who ought to be pitted against the "big brain" who's supposed to be the mastermind behind it all.

It takes Bobby an eon to spot the absolutely neon sign pointers. The second victim is all secretive about a crossword puzzle which he is devising. Yet he says to Bobby, in no uncertain terms, that he (Bobby) will want to give it his attention at some point. And when Bobby does gets his hands on the thing, there at the top, big as life is the phrase: Key Word: "Gold." And there are a bunch of words that have to do with digging and location and such. Somebody's been digging in the broken-down summer house. I wonder whatever they could have been looking for? Oh, my. What could it be?? Not to mention the fact that Mitchell, other police big-wigs, and the Chief Constable all keep rattling on about how the "big brain" behind it all is so wonderfully organized. Everything figured out to the last jot and tittle. Gee, Bobby, have we met anyone in this cast of characters like that? Anyone at all whom everyone says organizes and arranges absolutely everything? Honestly, when Owen, Mitchell, and company finally figure it out and get round to explaining everything, I wasn't much impressed--even though Mitchell hints that he's known a bunch of this for quite some time. (So, where were you, Mitchell? Off in the wings while the play was going on.) I was too tired of our hero's apparent obtuseness and frustrated that we hadn't got there sooner to be impressed.

And can we talk about that ending? That has got to be one of the most gruesome ways that a villain has committed suicide in Golden Age crime fiction. Yikes.

This is the most disappointing of the three Punshon mysteries I have read so far. ★★

First line: It was one of the loveliest days of a lovely summer, and Detective-Constable Bobby Owens, B.A. (Oxon, pass degree only), as he jogged placidly along on a brand-new motorcycle (Government property) at a quiet forty or fifty m.p.h., with an occasional burst up to seventy or eighty when he was quite sure there were no traffic police about, was almost able to persuade himself that after all there are on this earth, though rare, worse jobs than police jobs.

Last line (can't give the full sentence or it would spoil the plot even worse than my spoiler above): ...nor was there one of them that could move a muscle, or utter so much as a cry, so held in utter stillness were they by the horror and greatness of the deed.

Deaths = 5 (one drowned; two stabbed; one hit on head; one burned to death [rather gruesomely])

The only Punshon novel I have truly enjoyed was the very first one I read -- Diabolic Candelabra. It's like a Grimm fairy tale mixed with a dark detective novel. Plus its mostly about the search for a chocolate recipe! I loved it and I think it's one of Punshon's best. None of the other Bobby Owen mystery books I've read have lived up to the originality and bizarreness of Diabolic Candelabra. I stopped reading Punshon because the others I did read, though at times engaging and sometimes inventive with incidents, are overall fairly dull and dry.

John, I really enjoyed Information Received. I thought it a strong opening book for the series. The second book, Death Among the Sunbathers, was less engaging, but still better than this one. I've got the fourth book on the TBR pile, so I'll be giving Punshon at least one more try at some point.