Death in a Sunny Place 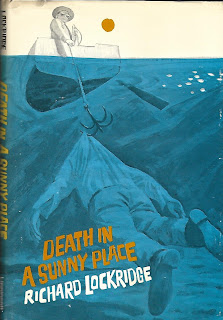 Death in a Sunny Place (1971) by Richard Lockridge

Enid Towne's mother, who had been house-bound since an automobile accident five years ago, has died. Enid grew up expecting to be comfortably well-off in their large Connecticut house with acres and acres of wooded, hilly land. But her mother's doctor bills and efforts to "keep everything just the way your father always wanted" have eaten up most of the ready cash and Enid finds herself with almost nothing except the "potential" (her lawyer's word) earnings from a sale of the house and land. But the market isn't good. And nobody really wants big ol' houses far from the big cities right now. And spring in Connecticut hasn't quite hit yet and it's dismal and gloomy.

So...when "Aunt" Lillian (a courtesy aunt who was her mother's friend) writes from North Carolina and invites Enid to the private club in the sunny south owned by Aunt Lily and her second (much younger) husband, Enid is very tempted. And there is something oddly insistent about this invitation from a courtesy aunt she hasn't seen for years.

You can't guess what a favor you'll be doing us....How many things there are you can help me with....I need you, Enid.

When Enid arrives, she can't imagine what she can do to help Lily. The place seems to run like clockwork. The staff are so efficient. Neal Stanton, Lily's husband, is the perfect, genial host for Hilltop Club. But from the very beginning Enid senses that something is wrong. Aunt Lily is jittery and jumpy and drinking too much in an effort to calm her nerves. There is a group of men who seem oddly out of place in the middle of the country club atmosphere--a little too intense and little too stand-offish. And there is Mr. Hadley, young man with prematurely white hair, who also keeps himself to himself. There seems to be an air about the place that says something is about to happen.

And then something does. Samuel Thompson, brother of one of the intense men, has disappeared. He had kept to his room because he was supposed to be ill and now he's just not there. And, apparently, he's just not anywhere. After a search of the grounds finds no trace of him and none of the cars are missing, the state police decide to drag the lake. They find Mr. Thompson. And it's not an accident--no one accidently hits his head, gets tied up in a rope with a stone at the other end, and leaps into the middle of the lake. Murder has been done. Does it have anything to do with the men Enid saw talking in the darkness below her window? And what about the "nightmare" Aunt Lily says she had about a man being struck down on the terrace? Enid soon finds herself in a dark nightmare of her own in what was supposed to be a sunny retreat. And the worst of it is she doesn't know whom she can trust.

The Lockridge books definitely lost something when Frances died and Richard started writing on his own. Even the plots that should be a little more straight-forward mystery (like this one) wind up with a more melodramatic suspense feel. And, I have to say, I just don't appreciate the more suspense-oriented Lockridge books (whether written while Frances was still alive or not) as much as the more straight-forward mysteries. The stories written by Richard alone also have fewer instances of the lightness of tone and sparkling humor of the earlier books--I can only suppose that lightness was Frances's doing or Richard lost his firm grip on the light touch when he lost his first wife.

This particular book has the additional disadvantage that the mystery really isn't much of one. Everything becomes pretty obvious about midway through the book even though Lockridge tries to muddy the waters by making one of the character's behavior and motives seem unclear. But it really didn't work--at least not on me. To be a true mystery there really needs to be more suspects with motives and that is missing here.

All this negativity makes it seem that I didn't enjoy the book, but I did. This is one of the few Lockridge books that I had never (according to my haphazard record-keeping pre-blog) read before and I had searched for a reasonably priced copy for quite some time before getting my hands on it in 2020. So it was a good anticipation read. I enjoyed the sense of place. Lockridge gives a good look at the Carolina countryside as Enid is driven to the Hilltop Club by Aunt Lily's husband. And we are given a good description of the club itself and its grounds. The writing is good and crisp and the action flows well making this a quick, fun read. ★★★

First line: She heard that slow thudding sound which meant that Mrs. Mills was coming downstairs, plodding down, holding carefully to the left hand rail.

Last lines: "Yes, Ted," Enid said, and wondered if she had said more than she meant to say. As he leaned down to her, she decided that perhaps she had not.

Deaths = 3 (one natural; one plane accident; one hit on head)