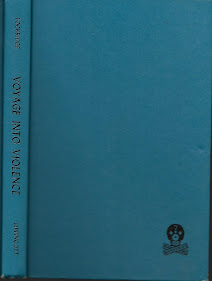 The Lockridge husband and wife team wrote twenty-six novels featuring Pam and Jerry North as well as Lieutenant Weigand and Sergeant Mullins. Voyage into Violence is number twenty-one and it finds the Norths on a high seas vacation with their friends Bill Weigand and his wife Dorian. What they expect to be a carefree ocean voyage aboard the S.S. Carib Queen headed to Havana and Nassau soon turns into death cruise when a fellow passenger is killed in a highly bizarre fashion. The victim is found with a ceremonial sword deep in his chest--a sword which Pam North had seen earlier hanging a the side of a man in an odd tunic and blue trousers.

"We have been boarded," she said [to Jerry]. Men with swords. They're all over the place. Pirates? Before we even leave the pier? Or is he the captain?

The sight also causes Pam to wonder aloud, "What...what kind of ship is this anyway?" And well might she ask. When the murder occurs. Pam is takes off on another sleuthing adventure with plenty of suspects to wonder about. There is the professional dancer; the dowdy, depressed and frustrated young woman; her clinging, overbearing and often drunken mother; and a whole convention of Ancient and Respectable Riflemen--any one of whom may have grown tired of the rifle and perhaps chosen to use a sword to settle the victim's hash.

But in reality, this is Bill Weigand's book more than many others in the series. While he, Dorian, and the Norths do sit in their cabins and around tables in the lounge and discuss details for Pam to mull over, he spends quite a bit of time sleuthing on his own with the captain's blessing. He interviews suspects and witnesses. He examines the cabin of the murdered man and the storage area where the sword was supposed to be kept. He sends off telegraphs to Sergeant Stein and "the boys" back in New York and telephones for answers to questions he can't get on board. Pam does come up with a few partial ideas, but Bill distills and condenses them to find the solution that will answer all the questions--including a few that Pam doesn't think to ask.

I thoroughly enjoyed my vicarious cruise to Havana with the Norths and the Weigands--mystery-solving and all. It's an interesting little puzzle and one might guess part of it without having all the facts. I will say that I'm on the side of Dorian and the Norths, though. I don't think Bill shared all the info necessary to completely solve the mystery on our own. As we're told in the wrap-up scene:

It had not, they told Bill Weigand, by expressions on their faces, and also in in words, been fair. he had known something they did not know; he had deliberately kept from them what he knew.

He, of course, says that he'd merely asked a question (and gotten the answer) that they hadn't. If they had asked him the question, he would have told them (and me, by extension).

I also think that I would have been more satisfied if the entire mystery plot had played out aboard the ship--keeping it all in the family, so to speak. While the explanation takes places back on the ship, the final act of the mystery takes place in Havana and there is a sense that things are slipping away--that there are threads we can't possibly pick up because the suspects are no longer contained on board. But overall, another fun adventure in the series. ★★★★

First Line: Pamela North stepped out into the passage-way and encountered a man wearing a sword.

"Are you really a private eye?" Pam North said, going to the point...."Yes," Marsh said. "At least, I used to be. Retired last year." Pam was a little disappointed. It was bad luck to catch her first private eye just when it had closed. (pp. 18-9)

Pam....considered the exertion of applying oil to moderately browned legs--and so forth. The bathing suit left a good deal of so forth, and Jerry liked it very much. (p. 21)

Mrs. Macklin did, indeed, dampen gaiety. She was almost, Pam thought, enough to make one give up alcohol. (p. 34)

Bill boarded her* train of thought with the ease of one who has had long practice. (*Pam's; p. 22)

You couldn't, he said, start adding things to other things merely because-- He discovered that the others were looking at him expectantly. He peered about his mind for an exit from a sentence which seemed to have closed around him. "Merely because they happen to be there," he said, and felt it feeble. Pam, at any rate, looked disappointed. "That's very interesting, Jerry," Pam said, courteously. "You mean--we can't add--oh, apples and elephants? Merely because there are elephants?" (p. 67-8)

There was nothing whatsoever to support Pam's theory. It was--it was merely one of those things which seemed to leap into her mind...."Mmmm,"Bill Weigand said, and so paid tribute to those things which leaped into Pamela North's mind. It was not that she was always right. It was more that she was seldom altogether wrong. (p. 69)

The ship steamed prettily into ever warmer waters, suffused with rumors. This was rather pleasant than otherwise for the hundred and forty-odd passengers. It is not always that to the divertissements offered on a pleasure cruise, the spice of mysterious violence is thus generously added. (p. 96)

Now he was not really seeing the chests; he was simply, not too happily, wondering where--where the hell--he went next. This uncertainty sometimes afflicts detectives, as it does others. It is, of course, nothing to reveal in the presence of possible malefactors. (p.105)

At a certain stage--Bill could remember very few cases in which this had not been true--a shape of things begins to form in the attentive mind. The shape is vague at first--amorphous at the center and, at the circumference, diffusing into mist. But the shape is there--the incipient shape. (p. 107)

...a crime is like an iceberg, floating for the most part submerged--the iceberg in the ocean, the crime in its past. (p. 108) 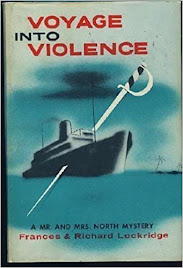 The maîtres' face brightened. He nodded and nodded again. A clever one, the maître's face said. I understand, señor. The señor is discreet. The señor may rely on the discretion of the Castle Club. (The maître had a talkative face.) (p. 164)

Last lines: Jerry started to speak and ran a hand through his hair. He decided that he had, after all, nothing relevant to say.