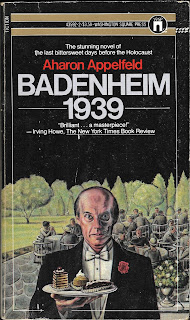 A story of the last spring and summer in the resort town of Badenheim, Austria before Germany invaded Poland. Badenheim serves as a haven of culture for Jews. It is the site of a famous music festival and Dr. Pappenheim, the organizer, promises that this year will be bigger and better...something they will all remember. Everyone--from Dr. Schutz, with his weakness for teenagers; Frau Zauberblit who has run away from a sanitorium (apparently a tubercular patient); Dr. Fussholdt, who is finishing a draft of his most recent book; Mitzi Fussholdt, his beautiful and spoiled wife; the pharmacist and his sickly, delusional wife; the twins who recite Rilke; the child prodigy who sings like an angel; the musicians who believe practicing will spoil their music; and the powerful Princess Milbaum.

Each is caught up in their plans and troubles and Dr. Pappenheim thinks that the worst thing that can happen is for his festival schedule to go awry and the musicians to arrive late. But then a horde of mysterious inspectors from the Sanitation Department descend upon the town, conducting more intensive inspections than anyone can ever remember. The residents convince themselves that "something must be going around" and that it is all for their good. But why would sanitation inspectors need to know about your family history? And why do the Jews, and only the Jews, have to register in a Golden Book? And what does this relocation to Poland mean?

This is a slightly surreal allegory of what happened in Germany in the years leading up to World War II. Like the pharmacist's wife, the nation which was defeated and punished at the end of the "war to end all wars" is "poisoned and diseased." The people's need for direction and order make them vulnerable to the fascist regime. The victims unquestioningly follow the orders and believe the lies that they are headed to a better life in Poland. They all expect that anything bad will affect others and not themselves. The themes are powerful, but the surreal nature of the prose made reading it a little difficult for me. But one can't deny the power of the final scenes knowing what will happen next. ★★★

Last line: Nevertheless Dr. Pappenheim found time to make the following remark: "If the coaches are so dirty it must mean we have not far to go."