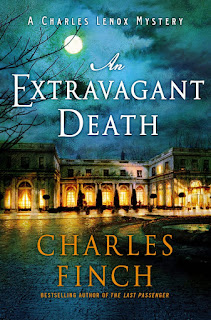 An Extravagant Death (2021) by Charles Finch

Charles Lenox and his detective agency are just coming off a big case--a corruption case that has rocked Scotland Yard and put the aristocratic backers of some of the Yard men involved. While Prime Minister Disraeli wants the corrupt men brought to justice, he wants to mitigate the damage to the government as much as possible. His solution, have Lenox's evidence given in a written affidavit rather than live and person (for a drier, less sensational effect). He plans to send Lenox to the United States with all the pomp and circumstance of the Queen's representative. The reason for the trip shall be that Britain is looking to set up reciprocal relationships with the police forces and detectives of other countries to share practices and to give assistance when possible.

Lenox has barely begun his tour in the States when a request comes from one of the wealthiest families in the wealthy enclave in Newport, Rhode Island. A beautiful young woman named Lily Allingham has been found dead on the beach below the "cottage" owned by William Stuyvesant Schermerhorn IV. It would be most convenient if the woman had committed suicide, but the wound in her head and the position of the body seem to rule out anything but murder. Lily was in her last season as a debutante with her choice of beaus and had been expected to announce her engagement very soon. The front-runners in the marriage race were Schermerhorn's son and a nephew of "the" Vanderbilt. Had she turned one of them down and received a killing blow in a moment of outrage? Or are there others with a reason to kill the almost too beautiful woman?

Lenox will need to find out who knew Lily best and examine the timeline for a society ball before he can find the answer. His task is made more difficult because he is out of his element and without his usual helpers. A young scion of another of the leading families fancies himself as an amateur detective and lends Lenox a hand. But it's just not the same as having Dallinger or Graham at his side. And how much real help can the young man give anyway?

It was interesting to see Lenox in a different setting and watching him adapt from Victoria's England to the Gilded Age in the States. But I have to admit I'm not overly fond of stories that take the detective out of his usual environs. Especially when they don't have any of their usual companions around--he didn't even get to take Lady Jane along. After having read one of the prequel novels, I was very excited to get back to the "current" Lenox. I like him better as a seasoned detective even though it was nice to see his beginnings in the trade--and, to be honest, I enjoyed the stories where Graham was more Lenox's right-hand man rather than following his career in Parliament and only appearing occasionally.

The plot is a good one. Mystery fans with a lot of reading under their belts may see the particular twist coming, but Finch handles it well and readers who haven't encountered that type of solution before will be surprised. I'm not sure that I like the overall ending, however. The culprit has escaped justice and though Lenox is assured that s/he will be no further threat, I do wonder if we'll see them crop up again at a later date.

I appreciate Finch's research and the way he uses it to bring the times and places alive. We definitely get a feel for the opulence that existed during America's Gilded Age. And he underlines the differences between the U.S. and Britain during the same time period without making too much of them and without making the reader feel like they are sitting through a history lesson. Highly enjoyable read. ★★★★

First line: It was a sunny, icy late morning in February of 1878, and a solitary figure, lost in thought, strode along one of the pale paths winding through St. James's Park in London.

Last line: When it was gone, she turned inside--for of course there was much to do, and experience had mad her a practical sort of person; and she knew that whatever else you might think you know about life, something else always came next.