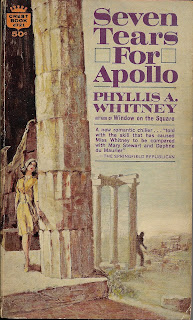 Seven Tears for Apollo (1963) by Phyllis A. Whitney

Dorcas Brandt flees to the Greek island of Rhodes in order to escape the menacing incidents that have occurred in months following her husband's death in an airplane crash. Twice her belongings are searched and a mysterious chalk drawing of two white circles are left behind. Before his death, Dorcas had learned of Gino Nikkaris's illicit art dealings...and his cruelty. She thought she was free when he died, but it seems that those who worked with him believe that she has something they want...and must acquire at any cost.

In Rhodes, the beauty and serenity of the ancient Greek ruins begins to calm her and she thinks she may have found safety, as well as a friend in the young American Johnny Orion, who works for Gino's foster mother (of sorts), Fernanda. Fernanda had taken Dorcas and her daughter Beth in when Gino died and now Fernanda, a famous author, had traveled to Greece in search of material for another book. But when the searches and symbols occur again in Greece and a strange woman with hostile eyes is hired to care for Beth it seems that danger has followed her across the ocean. It's especially difficult for Dorcas because no one--not Fernanda nor Johnny--seems to believe her. Is it all her imagination as they tell her (unstable nerves after her tragic loss) or is there an evil hand at work?

Well...this is a gothic romance/mystery, so of course there is evil going on. But who's behind it? What do they want? And when on earth will Dorcas grow a spine and stand up to Fernanda who seems to think she can run the woman's life for her? Just a few questions that occurred to me. Honestly, this is a decent example of its type and the mystery of who was doing what and why was a pretty good one, but I did get very tired of the whole "don't pay attention to Dorcas, she's been a little loopy since her husband died" routine--and Dorcas letting them get away with it. I also would have appreciated a more definite ending...things are just a tad ambiguous as far as certain characters getting their just desserts. ★★★

Side note--don't ask me who that lady on the cover is. Our heroine has blonde hair. The cover artist apparently missed that memo.

First line: The museum's stature of Apollo was a copy.

Last line: She walked close to Johnny wondering if the old gods might still amuse themselves on their Olympic heights.

Deaths = 3 (one plane crash; one hit by car; one fell from height)