Secret of the White Rose 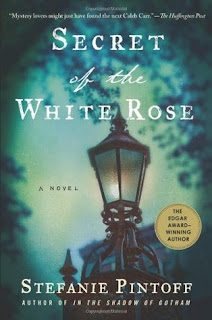 Secret of the White Rose (2011) by Stefanie Pintoff

The third (and final, it seems) installment in the Detective Simon Ziele series set in early 20th Century New York. Ziele generally works with with criminologist Alistair Sinclair to hunt down answers that the more unimaginative members of the force can't even begin to discover. This story begins with Judge Hugo Jackson feeling edgy on the evening before the verdict is expected in the high-profile trial of Al Drayson. Drayson is an anarchist accused of attempting to blow up the Carnegie family wedding. But the anarchists' mistimed their bomb and it went of in the street killing innocent bystanders. Most affecting were the pictures of a single child's shoe the only thing remaining from a four-year-old boy caught in the blast.

The public has been divided between those howling that Judge Jackson, in his efforts to make sure the trial was scrupulously fair so there would be no cause for a mistrial or hope of an appeal, was being too soft on the prisoner and those, who favor anarchy, claiming that Drayson was being railroaded. Jackson will be relieved when it's all over. Little does he know that it's all going to be over for him...well before court opens the next day.

Jackson is found murdered in his study, his throat cut, his hand on a bible, and a white rose before him. No one in his household saw anyone enter or heard any noises whatsoever from the study. Alistair Sinclair was friends with the Jacksons and the judge's wife asks him to investigate. Alistair, in turn, asks for Ziele's help even though the murder took place well outside his jurisdiction. Fortunately, the case is so important that the commissioner is pulling in police from all over to hunt down the anarchists who must be behind this. When a second judge, also well-acquainted with Sinclair, is killed--this time shot and found with his hands bound in front of him and a bible and white rose nearby--Ziele begins to suspect that there is more to the case than anarchists. He's also certain that Sinclair is keeping something from him. But that isn't unusual. The criminologist has always preferred to play certain cards close to his chest in order to make the maximum effect when he reveals a solution. But this time keeping Ziele in the dark may cost Sinclair his own life....

It's been not quite ten years since I read the first two novels in this trilogy, but I find my response to the final installments has mirrored my reviews of the previous books. It's a fine plot with a very interesting explanation for the white rose and other clues found around the victims. I still find Ziele to be a good lead character and astute investigator and...I still can't figure out his relationship with Sinclair. The man will not trust him with all he knows and Ziele finds it hard to completely trust Sinclair. The relationship just doesn't make sense to me. You'd think after their work together, Sinclair would have figured out that Ziele is a good cop and a good man and that, especially now--in this particular case, it would be a good idea for him to have all the facts. It was also interesting to learn a little more about the anarchists of the early 20th Century in America. The historical background is explained well and woven into the story without overburdening the plot with info dumps.

My primary complaint with the plot is that there is no way to have seen the solution coming. There isn't a single hint what the white rose means until the end...and if you don't know what the white rose means, then you can't possibly figure out who did it. However, the story is still entertaining and packed with action--making for an enjoyable read. ★★★

First line: Judge Hugo Jackson was on edge--and had been, ever since the trial began.

Last lines: The lies and half-truths, the betrayals and double-dealings, that I had witnessed were simply a part of life. But perhaps not always. Perhaps not tonight.

Deaths = 6 (one stabbed; one blown up; two shot; one natural; one fell from height)

Labels: 52 Books in 52 Weeks, BC by Erin, Medical Examiner, Mount TBR, Reading by the Numbers