Murder Off the Books 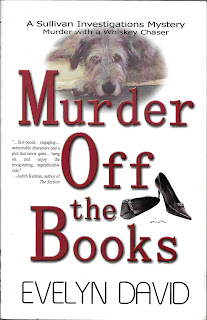 Synopsis (from the back of the book):

Is your tuition paid up?

College finals are killers--or maybe it's just the people who count the money.

A retired Irish Cop and a fast-food loving Irish Wolfhound search for the campus murderer while dealing with a scooter-riding senior citizen with dreams of trench coat adventures, a crazed exterminator looking for his ride, and a makeup artist whose mid-life crisis isn't any less stressful because her clients never complain.

A half-million dollars has vanished and a college comptroller is dead. Mackenzie Sullivan, recently retired DC cop and newly-minted private detective, really has no interest in the murder. Mac just needs to find the embezzled money for the university's insurance company. Finding the killer is a bonus that he's not sure he wants to earn.

My take (spoilers involved--read ahead at your own risk): I don't have a whole lot to say about this one. I picked it up at the Friends of the Library Bookstore because it's one of those academic mysteries and I have a real weakness for those. I've read some of the most godawful things just because I couldn't resist an academic setting or academic sleuth or what-have-you. This isn't quite that bad--there's a half-way decent plot in there and I might actually like the characters better if they didn't seem to be intent on irritating each other repeatedly. I have two main thoughts:

1. The Wolfhound is a better detective than Mac. If he had only paid attention to Whiskey, he would have found the police's prime suspect--not just once, but twice. Not to mention that she was much more aware of others roaming around than he was. Whiskey is also the best character in the book. Followed by J J, the secretary that Mac never knew he needed until she just showed up.

2. If the prime suspect suspect--who swears he's innocent--would have just fessed up to the police about what he'd really been doing, then we'd probably have two less corpses and those nearest and dearest to him would never have been in danger. And, sure, that's often the case in mysteries. If only so-and-so had told what they know...or whatever. But generally speaking the reasoning makes sense (of a sort) and helps drive the plot in good way. I just find Dan really annoying and had to put the book down several times because I was disgusted with his self-centered behavior and the way he treated his big sister.

Overall, there are glimmers of good characters (when they're not shouting at one another) and the plot is decent. If another in the series comes my way, I might give it a shot. ★★ and 1/2