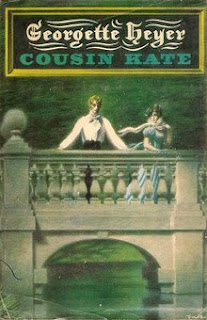 Late in her writing career Heyer decided to do something different--she combined a regency romance with gothic suspense and mystery. And unfortunately none of the elements are up to her usual standards. They're okay, but just not as strong as one would like.

Kate Malvern, our cousin of the title, is the daughter of Major Malvern, a British officer during the Napoleonic wars. Her mother died when she was twelve and when her father also passes on, leaving Kate with little more than will cover his debts, she is forced to earn a living. She takes up a post as a governess, but soon loses that position when the young man of the house forces his attentions on her and she rejects his offer of marriage. Finding that her youthful prettiness is a hindrance in finding another suitable situation, she returns to the home of her nurse, now Mrs. Sarah Nidd.

Sarah is aghast when she learns that Kate is determined to take what employment she can find--even as a lady's maid or dressmaker, if need be. So, Sarah writes to Kate's Aunt Minerva (her father's half-sister) in the hopes that family will be willing to help. Lady Broome (as Aunt Minerva is) more than comes up to scratch. She arrives in person to take Kate to Staplewood for the summer, buys her niece fine clothes and trinkets, and generally showers her with gifts.

Her aunt's family make her welcome, but there is a strange atmosphere about Staplewood. Her young cousin Torquil has fits of moodiness and temper. There is an odd doctor and groom who follow Torquil about as though he were still a small boy...or not to be trusted. Although the Broome's are the leading citizens of the area, no one comes calling and her aunt does little calling herself. There are rumors that Philip Broome--nephew of Sir Timothy Broome--has been behind certain accidents that have involved Torquil. And...there are odd noises and events in the night hours. What is going on at Staplewood? And what plans does Lady Broome have for her niece? For it soon becomes clear that Lady Broome does nothing without motives that would benefit Lady Broome....

I definitely think I like Heyer's work best when she is doing just one genre at a time. Her regency romances are top-notch. She has a few that have a slight edge of mystery, but no others with the gothic suspense feel. She also wrote a series of quite fine straight mysteries with a hint of romance. But this mix of romance-gothic suspense-mystery just falls short of her best work. The characters are very good and she gives them to us in deft little sketches. The one thing lacking in our heroine Kate is perception when it comes to her aunt. Kate, having lived a life "following the drum" and in close contact with all sorts certainly seems a bit naïve when it comes to the goings-on at Staplewood. You just want to give her a good shake and say, "Kate! Can't you see what's happening?" But, no, she can't.

But the reader can. The mystery isn't really about who is behind what--that's pretty plain. What one doesn't know is just how it's all going to work itself out. The ending does provide a nice little twist (though a bit of a melancholy one) before the happy ending that we all know is coming. ★★★

First line: At no time during the twenty-four hours was the Bull and Mouth Inn a place of quiet or repose, and by ten o'clock in the morning, when the stage-coach from Wiebech, turning top-heavily out of Aldersgate, lumbered into its yard, it seemed to one weary and downcast passenger at least, to be crowded with vehicles of every description, from a yellow-bodied post-chaise to a wagon, with its shafts cocked up and the various packages and bundles it carried strewn over the yard.

Last line: I think we won't discuss anything that has happened today. We shall eat our dinner, and after that I shall challenge you to a rubber of piquet...

Deaths = one hit by a cart; one strangled; one drowned
Posted by Bev Hankins at 8:59 PM