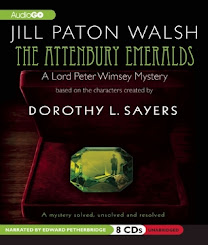 The titular Attenbury Emeralds have been the focus of mystery for quite some time. In 1921 Wimsey, just making his entrance back into society in his recovery effort after the war, is involved with the hue and cry that goes up when the famous large stone of the set goes missing. It is his maiden venture into the realm of amateur detecting and his handling of it and the publicity around the recovery of the gem launches him into the career that serves as the most efficacious cure for his shell-shocked nerves. He relays this story of  his first case to Harriet in the opening chapters.

Years later, after the Second World War, another crisis arises with emerald and the newest Lord Attenbury asks Wimsey to investigate. With all the changes after the war, most immediately the heavy death duties he faces on the passing of his father, the new lord would like to sell the emerald and save his estate. But a claimant has popped up--asserting that the emerald held in the bank vault is not Attenbury's at all, that somehow it has been switched. The bank will not allow Attenbury to remove the stone for sale until proof can be supplied that it is, indeed, the family's property. Wimsey with the assistance of Harriet and Bunter must track down the crucial moment when the stones may have been switched....but the case takes a more diabolical turn when they discover that each time the emerald was removed from the vault a death followed.

I first read this a bit closer to its original publication date and I have reused my synopsis from the time. My full review from that reading may be found HERE. I have to say that I was then underwhelmed by the handling of some of my all-time favorite characters. This time I listened to the audio and I am in two minds about the experience. The first two-thirds was listened to in the car (on a road trip with my son). And while I do like Edward Petherbridge's portrayal of the latter-years Wimsey in the original Sayers books, his reading of this novel leaves a bit to be desired. I don't know if the production quality is to blame (the "mixing" as my son said) or if it is just Petherbridge's style--but it seemed to me that he treated just about everything he read as some huge secret, spoken in hushed tones, even to the point that it sounded like he was trying to swallow the words before they were actually heard. Dialogue was generally better than the descriptive portions of the story--a bit louder and more distinct. It made for very frustrating listening. We would boost the volume for all the super-secret, soft-spoken, swallowed portions and then, suddenly, he'd burst forth it what seemed like a normal tone (which became a blast of sound at the higher volume). I had a slightly better time of it when I listened to the remainder through my library's hoopla account on the computer. Still had variable volume, but not quite as severe.

Volume issues aside, I will say that when I could hear everything well, Petherbridge made this new Wimsey story much more appealing than my previous reading. Perhaps, since I picture him as Wimsey he helps to lend credence to the story as a Lord Peter Wimsey story. ★★★  for the audio version (two stars previously)

First line: "Peter," said Lady Peter Wimsey to her lord, "what were the Attenbury emeralds?"

Last line: You really will have to come and visit, Cornelia, if only to see the sundial for yourself. Always your loving friend, Honoria

Deaths = 7 (one hit by car; two strangled; one bombing; one fell from height; one heart attack; one hanged)