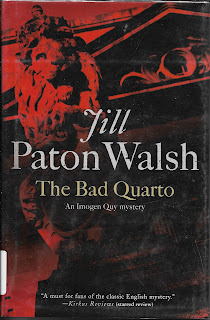 The book opens with a tragic accident--at least that's what the inquest determined. There is a place at St. Agatha's College, Cambridge, nicknamed "Harding's Folly--a gap between a window in the tower room of Fountain Court and a pediment on the New Library. Though discouraged by college authorities, it is a tradition among the "Night Climbers" to try and leap the gap. The Night Climbers scale all sorts of buildings--not only in Cambridge--for sport.

The tragedy occurs when John Talentire a brilliant, outspoken research fellow attempts the leap and falls to his death. Imogen Quy, the school nurse and sometime amateur sleuth, is on the spot just after the accident. The inquest is over and the death declared accidental while his friend Martin Mottle is away from college. When Mottle returns and hears what little has been released, he can't believe that Talentire, an expert climber would have died just that way. He manages to get an amateur drama society to put on a production of Hamlet and (unbeknownst to the rest of the players until it actually happens) substitutes his own "play within the play" which dramatizes what he believes happened the night his friend dies. The play may not be the thing wherein he'll catch the conscience of the king, but he does hope that it will expose a murderer. The odd thing is...Talentire's father insists that Mottle drop his investigation. And both Mottle and Miss Quy wonder why....

Paton Walsh does well with the academic setting. And she does superb scenes about the life of the mind and question of scholars escaping from the real world that does tribute to Dorothy L. Sayers' Gaudy Night in the most gratifying way. In fact, if she had managed to capture Sayers' spirit this well in any of the Lord Peter continuation novels I would have enjoyed them far more. It seems to me that she is far too aware that she's writing someone else's characters and it spoils the effect in the LPW stories. But--when she is writing her own stories with her own characters she excels at capturing the academic atmosphere.

I wish the mystery had been stronger. Previous Imogen Quy novels have featured Imogen's detective skills in a much better light. Here her investigations just aren't as interesting or inspired. Mottle really does the work of exposing the culprit and then the ending really isn't satisfying, at least not in the way the culprit is revealed and justice is meted out. ★★★ --primarily for the academic setting and atmosphere.

First line: It was much later than usual when Imogen Quy, the college nurse of St. Agatha's College, Cambridge, locked up her office in the college and went to fetch her bike for the ride home.

Deaths = 4 (one fell from height; one natural; two shaken to death)