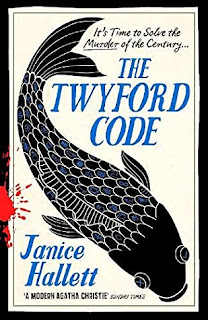 The Twyford Code (2022) by Janice Hallett

Synopsis (from the book flap): It's Time to Solve the Murder of the Century...[according to audio files given to the reader in transcript form] Forty years ago, Steven Smith found a copy of a famous children's book by disgraced author Edith Twyford, its margins full of strange markings and annotations. Wanting to know more, he took it to his English teacher, Miss Iles, not realising the chain of events that he was setting in motion. Miss Iles became convinced that the book was the key to solving a puzzle, and that a message in secret code ran through all Twyford's novels. Then Miss Iles disappeared on a class field trip, and Steven has no memory of what happened to her.

Now, out of prison after a long stretch, Steven decides to investigate the mystery that has haunted him for decades. Was Miss Iles murdered? Was she deluded? Or was she right about the code? And is it still in use today? Desperate to recover his memories and find out what really happened to Miss Iles, Steven revisits people and places of his childhood. but it soon becomes clear that Edith Twyford wasn't just a writer of forgotten children's stories. The Twyford Code has great power and he isn't the only one trying to solve it...

Fair warning: There is no way I can discuss my response to this novel without spoiling bits of the plot here and there. Read on at your own risk!

Okay. Let's just start with the first part of the blurb: It's Time to Solve the Murder of the Century. Except, yeah, no, it's not. There is no murder of that kind of importance here. In fact, some of the murders we're told about apparently didn't even happen. They're made up for the sole purpose of misdirecting the reader. In the big reveal at the end, we discover that one of the most important "murder" victims is, in fact, alive and well and living in comfort not too far away. A second victim is living in about the same circumstances as when we saw him last (before being told he was dead). And those who are killed just don't, I'm afraid, warrant a "murder of the century" label. It would be more accurate to say that it's time to solve the crime of the century (though that is still pushing it as far as hype goes). There's definitely a major crime to be solved. After all, that much gold and jewelry is kind of a big deal.

Next up: I really felt let down after the big build up of Twyford and her code and the secret WWII gold and Nazi spies and all that. I was quite excited that Steve and Lucy were on the track of a major WWII secret and I thought it terrific that children's books had been used to convey a code during the war. But, hey, that's all completely made up! For no real reason at all--except to give Steve a story to tell in audio form so he can hide clues to the real gold that he stole in a way that (supposedly) only his son (a genius math/puzzle guy) will be able to figure out.

Last of my big quibbles: The ending is left hanging. Does Steve's son go and find the gold? Who knows. Did all of the other murders we're told about really happen? Again, who knows. I'm not even sure that Steve's mom and dad were killed at all, let alone in the ways described. The only one I believe in is the one Steve got put in prison for (and he didn't even do...). As a murder mystery, this leaves a lot to be desired.

Now we'll turn to the positives. Is this a clever book? Oh, yes. I enjoyed the use of the audio transcripts as a means to convey the story. It completely hooked me. I'm not so good at secret codes and anagrams and acrostics, so there's no way that I could have figured out the code if it hadn't been spelled out for us, but that didn't dampen my enthusiasm. I was completely sold on the Twyford Code. Hallett is excellent at pulling the wool over her reader's eyes and that is great fun too--within limits (please see above for where I think the limit was exceeded). I enjoyed the (totally made up) search for Miss Iles and the WWII secrets. I wish it had been more real within the context of the story.

I did appreciate the underlying theme of redemption and reconnection. I hope that Steve's story as it comes through the narrative is more or less true, because it shows how one can overcome one's past and connect to a better future. ★★ and 1/2

First line: Dear Professor Mansfield, I am investigating a mysterious case and suspect you may be able to help.

Deaths = 6 (one natural; one beaten to death; one hit on head with poker; two shot; one car crash)