You Only Hang Once 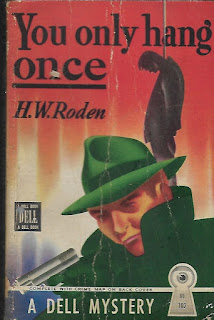 Johnny Knight is a public relations man who's having a bit of trouble with relations with a certain portion of the public. Vitalia Barretti, a shady nightclub owner and gambling den overload, keeps telling Knight to come see him and Johnny isn't interested. That doesn't suit Barretti, so he sends a two-bit thug named Yance to bring the PR man along. It seems that Barretti has the idea that Knight, a friend of Marvin Reynolds, has some sort of pull with R. S. Reynolds, a wealthy and influential man who--as part of the Reform Council--is out to shut Baretti and all his gambling buddies down. And he wants Knight to tell Reynolds to lay off...or else things might turn ugly for everybody, including Knight. Our hero tells the small-time mobster to peddle his papers elsewhere and takes a scenic route (via a barroom) back to his office.

When he arrives, he finds Abe Berenson, a lawyer with an office in his building, shot through the head and propped up in Knight's office chair. Figuring that someone (probably Baretti) is fitting him for a frame, Knight calls on his friend Sid Ames--private investigator who loves a good brawl and has a distinct dislike for cops. Ames and Knight set out to discover who killed Berenson and why (it's not such a pat answer as one might think) before the cops decide that the frame-up is the real deal. Along the way, they get shot at, knocked out, tied up, drunk off their butts on stingers,

"Of course it's good," I [Johnny] replied. "Haven't you ever drunk a stinger before?" "No. You see it's this way, Johnnie [sic]. Last week I was reading one of these who-dunnits--detective thrillers, you know. In the book the detective kept drinking double stingers all the way through the story. I figured anything that guy could do. I could do."

and manage to run into even more dead bodies. Ames begins to see a pattern and thinks he's ready to name the killer, but it's Knight who finds the last piece of the puzzle and gets the whole picture right.

So...I'm in two minds about this one. I do like the Knight/Ames team. That is, I like them as characters and I like the way they interact with each other and the other characters. But I don't think I'd want them investigating a mystery for me. Especially, if I were going to be directly involved. Because, by golly, these guys don't know when to keep their traps shut. They blurt out information in front of suspects which could be dangerous. And part of it is...to the killer's next victim.

In general, it's a perfectly fine hard-boiled, two-fisted story (Ames does like to knock heads). There's a bit of a twist to the ending and even a fairly placed clue that, if picked up properly, could lead the reader to the right culprit. I didn't pick it up till it was too late...I got distracted by other factors. ★★ and 3/4

First line: The swivel chair was tilted back, my feet were comfortably on the desk and I had the morning paper opened at the sports page reading about a plater called Brass Monkey which had run second at Tanforan.

Last line: As the barman turned to comply with my order Sid added, "Yeah. Make it a pitcher."