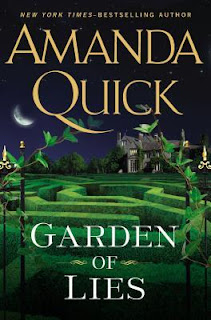 Slater Roxton is a man of mystery. Once thought dead in an accident on a far-off island while on an archaeological research trip, he returned to England a changed man. Some rumors said that he had returned to England to seek vengeance on his partner who had left him for dead or perhaps on his stepmother whose sons will inherit the wealth of his father--which should have been his. Some rumors said being nearly buried alive had driven him mad. Other rumors said he now followed strange and unmentionable rites in the basement of his house--rites derived from his researches on that island.

Not all of the rumors about him were false.

Mrs. Ursula Kern has reinvented herself after her husband died and she later wound up a star witness in a nasty divorce trial. With a new name and a fiercely independent determination, she has built an exclusive secretarial service. But she worries that someone will unearth her unconventional past and destroy the success she has worked hard for.

When Ursula's closest friend and one of her most efficient and reliable secretaries, Anne Clifton, dies unexpectedly, the authorities deem it an accidental overdose (while heavily implying that it was probably suicide). Ursula believes otherwise and decides to investigate herself. Anne had been working for Lady Fulbrook, transcribing and typing the woman's poetry for submission to an American magazine. But she left behind some puzzling items--her notebook, written in her own brand of shorthand, which contains references to a perfume shop and what seem to be instructions for mixing herbs; an empty perfume bottle; and a packet of seeds. There are dark rumors surrounding Lord Fulbrook and his treatment of his lady, so Ursula decides that the best course will be to withdraw from her own current assignment, assisting Slater Roxton in cataloguing his antiquities, and take on the secretarial work for Lady Fulbrook.

Slater doesn't want to lose Ursula's assistance...and not just because she's an excellent secretary. There is a certain something about her that makes him think his solitary life may not be all it's cracked up to be. And when she explains why she is temporarily backing out of their agreement, he believes she's walking into danger. The two work out an agreement whereby they will investigate matters together and they soon find themselves immersed in a world of crime and corruption--ranging from drug dealing to blackmail--with a hired assassin on their trail. A crime lord is wiping out all traces that lead to his discovery and he includes these two meddling amateur detectives on his list.

Under the Amanda Quick name, Krentz writes historical romantic suspense stories. They are quick reads and fairly predictable, but nice for an occasional read. The two I've read most recently (this one and 'Til Death Do Us Part) have been set in the Victorian era and have been very mystery-oriented. The romance is there (including a couple of fairly steamy scenes), but I don't consider the romance to be the main component. The investigation takes center stage and there is much for mystery fans to enjoy. Ursula and Slater make a good team and I think it would be fun if they show up in more adventures in the future...after all Ursula is pushing him towards setting up a private inquiry business there at the end.  ★★★★

First line: Slater Roxton was examining the strangely luminous paintings on the wall of the ornate burial chamber.

Last line: His mouth came down on hers and she gave herself up to his kiss and the future.

*Personally, I think it would have been better to end a few lines earlier: "It was," Slater said, "the only one that seemed to offer hope."